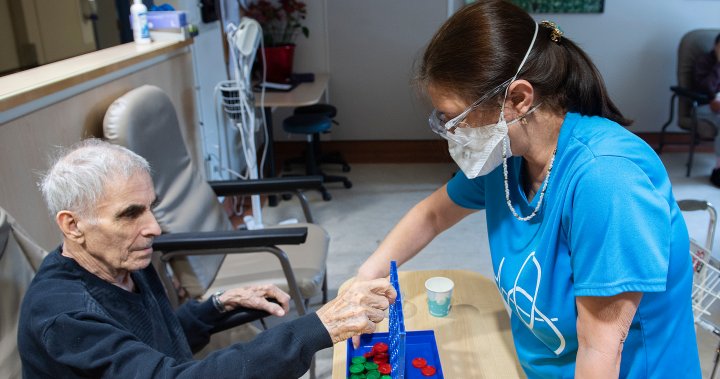 Most Canadians are deeply unhappy with how their provinces are handling health care in the wake of the COVID-19 pandemic, according to new data from the Angus Reid Institute.

In fact, in the eight years since the non-profit institute has been measuring public attitudes toward health care management, the percentage of Canadians who give their provinces a failing grade on health has never been so high — and this opinion spans every province.

“This does really represent the echo or the ripple effect, if you will, of what’s happened post-pandemic,” said Shachi Kurl, president of Angus Reid Institute (AGI).

“Regardless of the province they’re in, whether it’s Ontarians or British Columbians or Albertans or Quebecers, they’re saying, ‘OK, if the pandemic is over, then we have an expectation that the health-care system will be back up to snuff.’”

But as COVID-19 cases recede and restrictions lift, instead of seeing the hospitals and clinics gear back up to full capacity, Canadians are instead watching provincial health systems cracking under multiple pressures. These include health worker shortages and burnout, patients with chronic conditions who are sicker due to lack of care during lockdowns and millions of Canadians who don’t have access to a family doctor.

“What we are seeing is things falling apart and people signalling to their provincial governments, this is not good enough. We’re not happy about this,” Kurl said.

In March 2020, when the pandemic was declared, for the first time since 2014, a majority of Canadians surveyed by Angus Reid — 53 per cent — said they believed their provincial governments were doing a good job of managing their respective health-care systems.

But that honeymoon period is decidedly over.

Polling results from earlier this month found 72 per cent of respondents said they believe their provincial governments are doing a ‘poor’ or ‘very poor’ job of managing health care — the lowest approval rating for provincial health management since AGI started collecting this data in 2014.

Across the country, at most, only three in 10 people believe their provincial government is doing a good job of managing health care.

Sharon Batt, adjunct professor of bioethics and political science at Dalhousie University, says she believes it’s not surprising to see such discontent with the health system, given the toll the pandemic has taken and the previous stresses already in place within the system that COVID-19 has only exacerbated.

“I think it’s been clear COVID exposed a lot of weaknesses in the system that have been festering for a long time,” Batt said.

‘We are absolutely destroyed’ — Health workers facing burnout, even as COVID levels ease

“Now, suddenly people are starting to look at moving out of that kind of COVID obsession and saying, ‘Whoa, nurses are retiring early, our systems are all clogged up, cancer care is falling behind,’ and those things.”

The polling data also suggests health care remains a top priority for most people across the country, even as concerns about COVID-19 have faded.

Indeed, half of all respondents ranked health care as a top provincial issue, even when asked about skyrocketing inflation and costs of living.

This could present a pointed challenge to premiers as government coffers face the headwinds of serious economic pressures just as Canadians are demanding more of their health systems, Kurl said.

“It’s actually, if anything, a time where provincial governments are going to be signalling that we may have to be looking at cutting back,” she said.

“And so against that backdrop, you’re not likely to see people feeling very reassured about what their provincial governments are prepared to offer them in terms of effects.”

Batt says she worries some governments facing angry voters and a system in need of serious repair might be tempted to look at privatizing some health-care services to ease pressures.

“I think that people who are promoting privatized health care are kind of waiting in the wings,” Batt said.

“They could give some short-term relief. But I think on the whole, that’s probably not the direction most Canadians want the system to go and I think it is not the best way if you’re looking from an equity perspective and long-term solutions.”

Provinces should be willing to work more collaboratively with the federal government on health care, rather than balking at Ottawa’s growing trend of committing new funding with strings attached, Batt said.

The premiers have been jointly calling on the federal government to increase the Canada Health Transfer, while Ottawa has instead chosen to target new health spending in specific areas — such as a $2-billion top-up announced this spring to help clear backlogs in surgeries and diagnostic tests that have accumulated across the country due to the pandemic.

“If you’re going to address some of these problems, the federal government can’t just be shovelling out money and just saying to the provinces, ‘Do what you will with it,’” Batt said.

“I think there has to be a recognition that … the federal government and the provinces are sharing this whole issue. And I think the public wants to see a spirit of collaboration.”

The poll, conducted online by the Angus Reid Institute between June 7 to 13, 2022, surveyed 5,032 Canadian adults who are members of Angus Reid Forum. For comparison purposes only, a probability sample of this size would carry a margin of error of plus or minus two percentage points, 19 times out of 20.