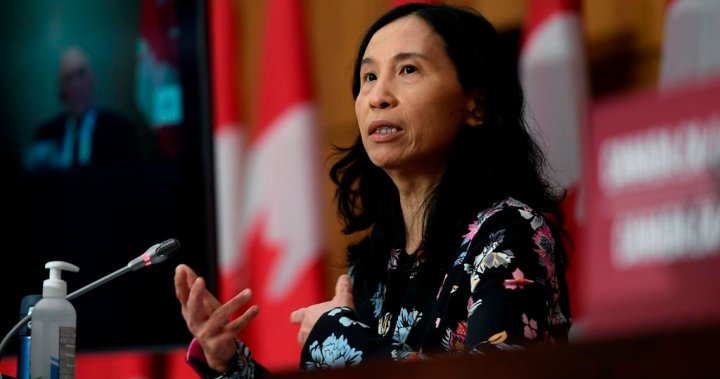 Men who have sex with men should practise safe sex and reduce their number of partners to limit the spread of monkeypox in Canada, Dr. Theresa Tam advised Wednesday.

The World Health Organization declared the virus a public health emergency of international concern over the weekend.

Tam, the chief public health officer, said there are 745 confirmed cases of the monkeypox reported in Canada and 99 per cent of those affected are men with a median age of 36.

Monkeypox: Canada’s top doctor urges those at risk to get vaccinated as cases climb

Less than one per cent of national cases involve women or people under the age of 20.

Monkeypox is circulating among men who have intimate contact with other men, Tam said, and while anyone can be infected, targeted public health measures for gay and bisexual men are needed.

“Learning from the HIV pandemic is very important, which is why engaging communities who are most impacted right at the start to together find solutions will be our best weapon against the spread of this virus,” Tam said at a virtual press briefing.

Tam said the Public Health Agency of Canada has been working with trusted groups to support men who have sex with men, and make sure they have information about how to protect themselves from the disease.

“We’ve also been working with apps, Grindr and others, to make sure people get the messaging in order to link them to the right information, and also access the vaccine and know what to do if they think they may have monkeypox,” she said.

It is also important that federal and provincial governments work with universities and colleges when students return in the fall, Tam added.

Monkeypox is associated with a painful rash that can be accompanied by fever, chills, swollen lymph nodes and body aches.

While not considered strictly a sexually transmitted infection, it is spread through contact with bodily fluids or scabs and contaminated personal items like clothing, bedding, sex toys or toothbrushes.

Monkeypox is a close relative of the eradicated smallpox virus, and smallpox vaccines have proven effective in fighting monkeypox.

The National Advisory Committee on Immunization recommends people with a high-risk exposure to a confirmed or probable case of monkeypox receive a dose of the smallpox vaccine Imvamune.

The federal government has so far deployed more than 70,000 doses of the vaccine to provinces and territories,and about 27,000 of those have been used.

For now, Canada has a limited supply of the vaccine but there is still enough should provinces need more.

Vaccine rollout has differed province to province. Quebec, with the most confirmed cases, has held open vaccine clinics for members of the gay and bisexual community. In Alberta, where there have been only 12 confirmed cases, people have had a harder time getting a dose.

Tam said public health units will handle the vaccine rollout differently based on their individual situations, but increasing vaccine access is important

“I think our social network is very highly connected across the country, and also globally as you’ve seen, so even if a case is not seen in one area of the country it may arrive at any given moment.”

This report by The Canadian Press was first published July 27, 2022.