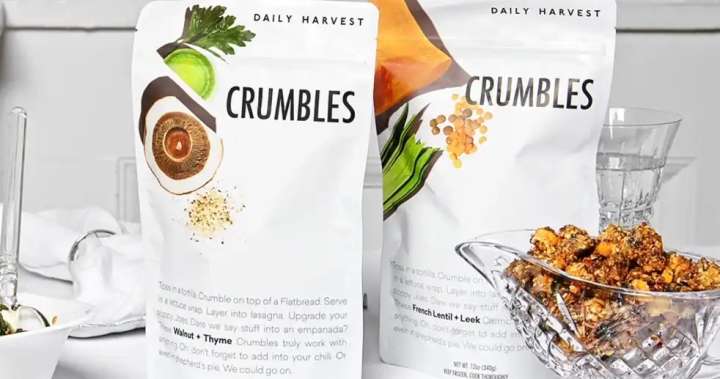 About a month after complaints of illness and hospitalization started to flood in to Daily Harvest, the direct-to-consumer meal kit company is saying they now know the reason why hundreds of people are getting sick after eating their food: tara flour.

Since June, Daily Harvest has been dealing with a barrage of angry customers and social media influencers who reported pain and mysterious symptoms after eating their “French Lentil & Leek Crumbles,” with some reporting liver dysfunction and having to get their gallbladder removed.

On June 19, Daily Harvest issued a voluntary recall of the vegan, lentil-based product, but at that point, 28,000 units of French Lentil & Leek Crumbles had already been sold or distributed. By June 23, the company said it had received 470 reports of illness from people who ate the dish.

“At this time, we have identified tara flour as the cause of the issue,” Daily Harvest announced on its website on Tuesday. “We have only used this ingredient in French Lentil + Leek Crumbles and we are no longer sourcing from this producer who does not provide any ingredients for our 140+ other items.”

Tara flour is made from the seeds of tara trees, which are native to South America.

“This was the first and only time we’ve used tara flour, which has been available and used in the North American market as a plant-based source of protein prior to our use,” Daily Harvest said. “Our investigation team will continue working with the (U.S. Food and Drug Administration), the tara flour producer and others to help determine what specifically made people sick.”

Social media influencers who had been sent Daily Harvest meal kits for free were among some of the first to sound the alarm that the company’s French Lentil & Leek Crumbles were making people sick.

Now, Daily Harvest is facing several lawsuits from disgruntled consumers, some of whom have been left with hefty hospital bills after eating its lentils. Two of the lawsuits were filed on behalf of children, one of which is a four-month-old baby who was breastfeeding, according to NBC News.

Marler said to NBC News that he told Daily Harvest’s lawyer that tara flour was likely the reason for the illnesses, since the French Lentil & Leek Crumbles were the only product that contained it.

No one knows why the tara flour is causing such extreme reactions, Marler said.

Daily Harvest has not made any public comment regarding the food-borne illnesses aside from the releases on its website and social media.

The company was launched in 2016 and grew rapidly by marketing its meal kits through social media influencers. Last November, Daily Harvest announced it had secured Series D funding that valued it at over US$1 billion.

0:42
Foods to avoid when eating out so you don’t get sick!