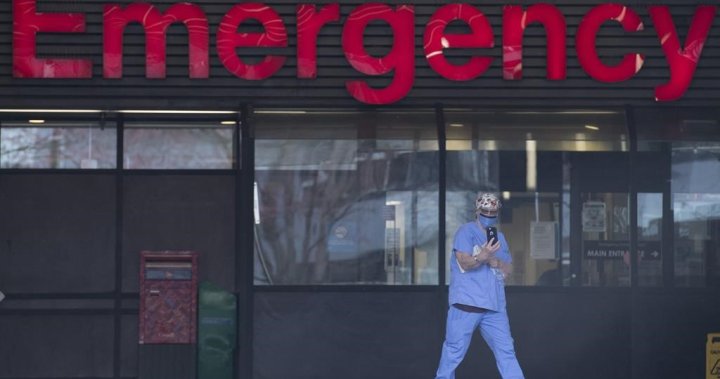 Dr. Raghu Venugopal, an emergency room physician in Toronto, says he believes the health system is not collapsing, but rather that it has “already collapsed.”

“Nurses and doctors across Ontario and Canada who are working in emergency departments are greatly dismayed, honestly, by the human situation that patients and families have to face on a daily basis,” he said.

“The wait times are exceedingly long. Nurses are overwhelmed by the number of orders that they’re being asked to carry out… There is no metric or no nothing that your eyes can’t see as a patient or family member in the ER that says the system has not anything but collapsed as we know it.”

Hospital emergency rooms across the country — from Vancouver Island to Newfoundland and Labrador — have had to temporarily close their doors this summer.

In Alberta, there have been 19 disruptions to emergency and ambulatory care facilities since the beginning of June.

A number of the ER closures have been in smaller, rural hospitals, such as the Dr. Helmcken Memorial Hospital in Clearwater, B.C., which has experienced over 20 closures this year, says Clearwater Mayor Merlin Blackwell.

“That’s obviously a huge concern to citizens that we don’t know that the ER is closed,” he said.

“More concerning is actually I’m hearing now that ambulance crews were unaware and showed up with a patient on the overnight shift and had to… divert to Kamloops. So that kind of communication breakdown is obviously very, very troubling.”

But the the problems aren’t just in rural areas.

On Sunday, Montreal Children’s Hospital was temporarily forced to turn patients away due to overcrowding. In B.C., where four Interior hospitals announced temporary diversions over the weekend, the official advice for those requiring emergency care was to call 911 — and move on to the next closest ER.

2:24
Staff shortages to cause ER closures in 6 Quebec hospitals this summer

Staff shortages to cause ER closures in 6 Quebec hospitals this summer – Jun 22, 2022

For some, this could mean travelling long distances for care.

In New Brunswick this weekend, Morgan Lanigan’s wife, Kelly, was in so much pain Sunday evening they decided they had to go to the nearest hospital emergency room, which for them was St. Joseph’s Hospital in Saint John. But the emergency department there was at full capacity — as was Saint John Regional Hospital.

After an hour on the road, the couple arrived to a full waiting room at the Dr. Everett Chalmers Regional Hospital, where they waited three hours to be triaged.

‘She couldn’t take the pain’: N.B. couple get turned away at several ERs

“When finally a doctor did come out and was taking vitals of everybody in the waiting room, which was really nice to see, but when he did take my wife’s vitals he did say, I believe, there is only two nurses on duty and the triage nurse who was on a 12-hour shift just raced down to Saint John to help them at their ER,” Lanigan said.

What is driving ER closures?

Dr. Katharine Smart, president of the Canadian Medical Association (CMA), says the issues driving these closures are complex, but one of the biggest issues right now are shortages of health workers across Canada, particularly in nursing.

“That’s the main reason we’re seeing behind closures is there’s just no one to actually work in the emergency department,” she said.

Normally, summers are slower periods for hospitals, but emergency rooms are seeing higher volumes of patients that are more typical of winter, which is unusual, Smart said. Many of these are patients who have been putting off seeing a physician during the pandemic and are now sicker or in need of more care.

But what’s most unusual are the ER closures across the country, she said.

‘We are absolutely destroyed’: Health workers facing burnout, even as COVID levels ease

“I think the impact of what we’re seeing right now really is unprecedented and at a level that is unique and it hasn’t happened in past years.”

Dr. Melanie Bechard, an emergency room physician at CHEO in Ontario says she has only been running a full independent practice for just over a year, and what she’s been experiencing has been nothing like her training.

“The volumes of patients that we’re seeing are record high, both for myself and for the hospital, and it was a really rude introduction to the practice of medicine, in a way,” she said.

“I’ve been seeing far more patients than I ever thought I would in a shift.”

Bechard says she has had to “compartmentalize” her feelings of guilt for the long waits being experienced by so many patients and families, while she can only safely treat one patient at a time.

“I think that as emergency providers, we’ve always viewed our work and our career as being one that is available for you 24-7, no matter what, any time of day. However, we’re seeing that we’re not able to deliver on that promise anymore,” she said.

“The thought of rural emergency departments being closed when there is very limited other options for after hours care is scary to see, and I really think it should absolutely capture the attention of policymakers and of the public. We really need to give these emergency departments the resources they need in order to stay open and deliver high quality care.”

Toronto emergency room physician Dr. Kashif Pirzada says a seventh wave of COVID-19 is fuelling a lot of the patient surges in his ER.

He believes governments and the public have gone too far in doing away with public health measures, such as masking and physical distancing, which is why more people are getting sick and needing emergency care.

“We’re getting waves (of COVID-19) every two to three months and the system was just not designed for the stress of this… so we’re seeing the strains now,” he said.

“On the other hand, you also have staff completely burned out from dealing with this for the last two-and-a-half years. So a lot of people have left emergency medicine, nurses and physicians, and that’s contributing to the problem now.”

A ‘dress rehearsal’ for fall and winter

And Pirzada believes it could get worse, if more isn’t done to stop people from contracting COVID-19.

“I consider this wave as a dress rehearsal for what’s going to happen in the fall or winter when we have another wave. But this time, we won’t be outdoors as much, schools will be back in session,” he said.

“So whatever stress we’re facing right now, we have to deal with it somehow. There needs to be leadership, otherwise we face much worse in the fall and winter.”

Physicians want policy makers to do more to immediately increase resources not just to emergency departments, but to other areas of health care, such as long-term care and primary care, so people who don’t need to be in an ER can get medical help in a more appropriate venue, Smart said.

But there also needs to be an acknowledgement that the health system is in crisis, she said.

“I think the first thing that needs to happen right now is just for governments to treat this like an emergency,” Smart said.

“There’s a series of pressure points that likely have some tangible solutions, but it’s going to mean meeting with front-line health care workers, rapidly identifying what they are and then putting the resources in to make those things happen.”

Venugopal says he feels for patients being forced to wait so many hours while they may be dealing with painful illnesses and injuries. But he says he is also concerned for nurses, many of whom have borne the brunt of patient frustrations that can often escalate to abuse.

He has seen nurses being subjected to racialized slurs and sexually harassing behaviour on a daily basis.

“It’s very important to point out and put a pin on the suffering in the nursing profession — our nurses are physically assaulted and are verbally assaulted every day in our emergency rooms. And this kind of work situation that they face is further driving them from the bedside,” he said.

“So it’s really a dire situation. And we need policy leaders and political leaders to show they give a damn.”