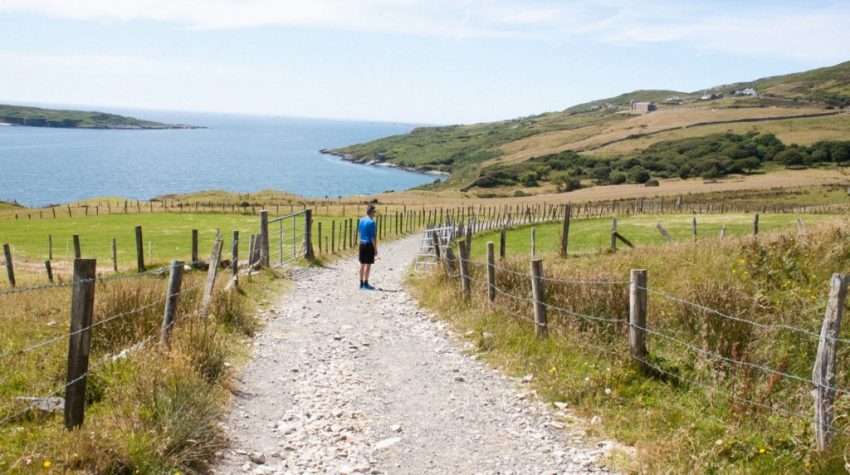 “I am not the same, having seen the moon shine on the other side of the world.”
Mary Anne Radmacher

Travel, like most things in life, looks a lot different in hindsight than in real time. It’s now been over a month since arriving home from our adventure in Ireland and looking back through the lens of everyday life, I’m happy to have these oh-so-special experiences tucked safely into my memory bank.

Not that this was a huge surprise, but Ireland was an unexpected gem in my travel jewel box. That’s why travel is so valuable, as you just don’t know where it’s seemingly random edges or shiny surfaces will leave its lasting marks on you. Those marks often reveal themselves long after returning home, and I for one live for the discovery that follows each adventure we take.

Like my 40th birthday trip to France last year, this trip was chosen to celebrate another significant milestone for our family, the 50th birthday of my husband (yay for ten year age gaps right?!). Our family name, from my husband’s side, is quintessentially Irish, and his desire to travel there an homage to that. The family stories on his side are rich in the colour of the famed Irish spirit, and his grandmother no dull light of a woman – in fact, she was an eccentric and rather successful woman affectionately known as ‘Diamond Lil.’ She decked herself in diamonds, smoked two packs a day until she died at 83, and was the first female realtor in Hamilton, Ontario, where her family emigrated from Ireland because of a poorly timed teenage pregnancy (is there such a thing as a well-timed teenage pregnancy?). Tightly held Catholic values meant the family of 5 girls and their parents could not conceive of living in their community with such deep shame, so they moved to Canada. The rest is family history.

We planned the trip so I would meet up with Tim in Italy, where he would be wrapping up a week-long cycling adventure with a group of friends. I flew into the small Milan airport and cabbed in to meet him at our hotel in the Brera district. This was my first time on Italian soil, so I was pretty excited. After three days of time change adjustment with Aperol spritzes, great Italian wine, sleeping pills and the best pizza I’ve ever had (more on that later), we flew together to Dublin.

I was excited, looking forward to cooler temperatures and coastal breezes after a few days of intense heat in Milan. Well-packed with wool base layers, a down coat, rain jacket and cool weather running gear – I was ready to experience the wild and damp country of Ireland I’d heard so much about. I wouldn’t see a single one of these items the entire trip. As car people, we opted to splurge on a ‘luxury’ car for the four days we would be exploring the Irish countryside. We rented an Audi A6 since that is what was available. We would soon learn this maybe was not the best choice.

We crossed the island that first night to arrive in our first Irish destination, a tiny seaside town on Ireland’s Wild Atlantic Way called Galway. To me, this was immediately indicative of what I had imagined as true Ireland, and after a harrowing experience trying to locate the Inn we had booked (and parking in the tiny lot!), we headed out to soak it all in. We absorbed the high street with the bright buildings, the kegs and kegs (and kegs! Did I mention the kegs?) of beer, pubs literally filled to the brim with boisterous drinkers and music, music, music. People everywhere enjoying either a holiday or a fun night out, it was hard to tell which and it didn’t matter; Galway is a party town, filled with what seemed like endless clusters of young people traveling from all corners of the world.

We’d read that Galway was a fantastic foodie destination, but the way the days of the week fell, the spots we wanted to eat in were not open while we were there. Thankfully there was great coffee. And plenty of beer and other beautiful distractions. It became clear to me early that this was not going to be a big food-focused trip, and I leaned into it as best I could. We had beer before dinner, beer after dinner, and merged into the local’s scene as best we could, soaking up the summer vibes. The weather was hot, 30+ degrees. It was all people could talk about, and it made for what in hindsight might have been a jollier than usual outlook amongst folks who reside there.  It’s hard to say really, but our two days in Galway were the start to a week of absorbing the spirit of Ireland’s colourful people and energy, as well as it’s horrifically tragic and dark history.

Here are the nuggets from our first few days in Ireland, plus a word of warning about driving those narrow roads. What we did in Galway

Coffee each morning at the lovely Coffeewerk + Press. Much like in our trip to Lisbon (here), we met a barista from the Pacific Northwest coffee scene. Proof that community transcends borders and that the world is indeed small. Fantastic cappuccinos (Ireland’s dairy is legendary as any foodie who has traveled there will tell you). An old three-story building transformed into a third-wave coffee spot, Coffeewerk + Press is complete with three floors of local artworks, housewares, and charm. I came very close to purchasing a stunning wool blanket here but opted to keep my luggage a little more free and my Visa balance lighter.

Running along the ocean. The water’s edge along Galway is very pretty, and one can almost see the activity that has graced these waters through the centuries passed on a morning run. We passed the Mutton Light Famine Memorial where many of Ireland’s legendary Famine Ships departed the coast for North America during the Great Potato Famine from 1845-1852.

Dinner at Ard Bia, under the Spanish Arch. At a locals recommendation, we ate at Ard Bia by Nimmo, a gorgeous little spot by the historic Spanish Arch, which was crafted in 1424 by the Spanish, who used the Galway port for trade. The menu had something for both of us and was very veggie-friendly considering that Ireland is not (yet) known for its plant-based friendly food. My meal was made better by the red wine and good conversation. Think flatbread and halloumi, seasonal vegetables and a Canadian connection as our hostess. A day trip to Clifden Castle. Not ones for big breakfasts, we grabbed some snacks and headed out to see an abandoned old manor house a few miles north of us in Clifden. Windy narrow roads, a few hours, and a few great songs later, we arrived in Clifden to enjoy lunch in the sun before venturing off to the old castle. We’d done some research on castles in the area, and while Clifden Castle is not technically a castle, we chose it due to the promise we’d read that there would not be people there. We liked that idea, and so off we went to explore, no map’s and no brochures and no fees, just two people walking down a gravel country road on the seaside trying to find an old 1850’s manor house. Horses, cows, the ocean breeze, and silence. Did I mention the sun? It was beautiful, and it hit me again why I love traveling in Europe so much ~ every step you take has been tread before you countless times. I can’t help but always imagine who has walked the roads before me, what battles were fought, and whose stories have lived on. We were out in the middle of nowhere on the literal edge of the world, with this magical green kingdom all to ourselves. I get goosebumps now just thinking about it. Beers before and after dinner at The Salt House. The Salt House is a bar owned by the folks behind Galway Brewing, a local craft beer company. After Clifden castle, we return to Galway to wash up and go for beers again at the Salt House. There we found a vibrant and raw locals scene, and rowdy, jovial live music. Board games. A place oozing with personality and grit. As I mentioned before, Galway is a town where people like to party. It’s a traveling town too, where eavesdropping on the locals over beer is all you need for a fine and entertaining afternoon. You may just run into folks keeping it going if you get up and out too early for your morning run (we passed several groups of revelers still drinking the night away at 8 AM in the morning). Ice cream at Murphy’s. Traceable, artisan ice cream. Or in their words, “Ice cream that knows where it’s coming from”. Delicious. Obviously.

Lunch at Tartare. Great sourdough sandwiches by one of Ireland’s most relevant chefs. His other restaurant, Aniar, was unfortunately closed during our stay. Aniar is a Michelin starred restaurant and boutique cooking school and chef and owner JP McMahon is big into local sourcing.

Listening to buskers along the high street. Galway is known for being a music destination and bars and pubs have live music every night, as well there are buskers playing late into the evening on the streets. Beer beer beer. Enough said. For those curious, we stayed in a hotel right in the heart of the city, since it was a short stay and sometimes that’s just the easiest. Now that I’ve been, I’m thinking it would be a good idea to look for a Bed & Breakfast next time.

Our first two days in Ireland were everything we expected plus quite a bit more. So was the driving! A word of warning that the roads in Ireland are extremely narrow, and hemmed in by ancient stone fences that are dangerously close to the road (there is no such thing as shoulders on the roads in Ireland). So, be prepared to drive these roads with everything being opposite (if you are from any part of the world where you drive on the left side of the car). Maybe rent a smaller car than we did. As usual, I trust my husbands driving explicitly, but I wasn’t so sure about the other tourists on the road, nor, many of the locals (we 100% almost got sliced in half by a rogue farmer driving a tractor).

Harrowing driving aside, after strolling along the river running through town, and a visit to the Galway Cathedral, we wrapped our two days in Galway and headed off on our next big adventure to see the Cliffs of Moher and the Dingle Peninsula. I can’t wait to explore our day in Dingle again with you here. More to come in my next post, and if you’ve been to Ireland I’d love to hear your thoughts on anything you’ve read! I’ll be exploring the rest of our trip here in a few more posts to break it up.