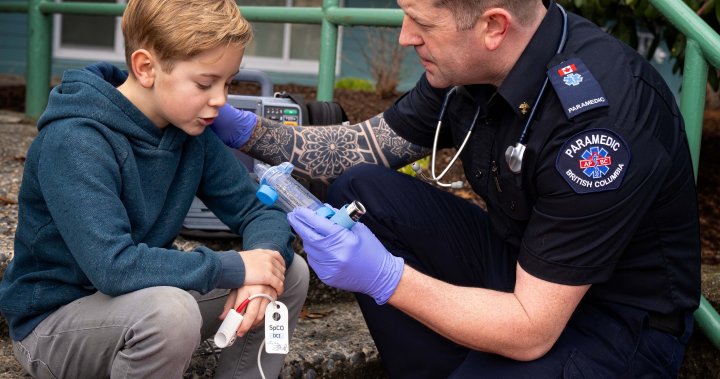 With heat warnings being issued across much of Canada in recent days, first responders say they are deeply concerned about their ability to respond to heat-related emergencies in a timely way — or at all — amid health systems already buckling under the strain of staffing shortages.

Ian Tait, an advanced care paramedic in British Columbia, says paramedic staff shortages in his province have become so protracted that on any given shift in Vancouver, 30 per cent of ambulances are sitting empty and many smaller communities don’t have EMS coverage at all.

If emergency calls start coming in due to a major heat wave under these constraints, Tait says the situation could become even more critical.

“I don’t want to be dramatic about it, but there’s a very real and likely threat that you’re going to call 911 and there could not be an ambulance coming,” he said.

Tait was on call last year when a record-breaking heat wave hit his province — one of the most extreme heat events ever recorded globally, according to research data released by the United Kingdom earlier this year.

B.C.’s coroner attributed nearly 600 deaths to the heat from mid-June to August 2021, with a dramatic spike of 526 deaths in just one week in late June.

Tait says those unprecedented days culminated in an evening in which ambulance services in the province “collapsed” and people in medical distress were left to wait for hours in sweltering temperatures after calling 911.

“Some of my colleagues have never experienced a night like that,” Tait said.

“The 911 systems, our ability to respond, to triage high acuity calls, low acuity calls, essentially just got put on the back burner for a significant amount of time. So there were some very significant and tough decisions that had to be made that night by our dispatchers, for sure.”

Now, the situation within the province’s health system is even more constrained. A number of emergency rooms and urgent care centres have been forced to close intermittently, due to shortages of doctors and, particularly, nurses.

1:08
Woman dies of cardiac arrest after ambulance and ER issues in Ashcroft, B.C.

Woman dies of cardiac arrest after ambulance and ER issues in Ashcroft, B.C.

Last weekend, a woman in Ashcroft, B.C. died of a cardiac arrest, despite living minutes away from a community hospital. The facility’s ER was closed, the nearest ambulance was almost 30 minutes away and the next nearest hospital was a 50-minute drive.

If temperatures rise to 2021 levels with the health system as strapped as it is now, the situation would be even more dire, Tait said.

“I could tell you it’d be significantly worse than the (situation) last year,” he said.

“There’s a significant amount of ambulances in British Columbia right now that are out of service. And it’s just one of those things where it’s very, very concerning for a lot of our people to think about that.”

It’s an issue and a concern that reaches beyond British Columbia.

From coast to coast, a number of hospital emergency rooms and urgent care centres have had to temporarily close their doors to patients in recent weeks, due to major staffing shortages.

This is leading to cascading pressures on a number of health services, including paramedic care.

The Edmonton region has been consistently running lean on ambulance services and recently there have been none available to respond with a frequency that has caused alarm among many in the province.

Some 911 operators have been forced to hang up on those seeking medical help, he said.

“They’re hanging up on you because they’ve got to get to the next call and they have no paramedics to dispatch to even send to your call. This is what the system in Alberta looks like today,” Parker said.

In Ontario, first responders also do not have enough staff to deal with higher volumes of calls and higher-acuity cases arising from those emergency calls, says Darryl Wilton, president of the Ontario Paramedic Association.

And in recent weeks, an increase in COVID-19 cases in the province has added further pressure to an already deeply constrained health system, leading to more patients needing emergency care and more health workers getting sick, which takes even more resources away from ERs and health clinics, he said.

In Ontario, this has led to a significant spike in off-loading delays — where a lack of emergency department beds prevents incoming ambulance patients from being transferred to hospital staff. Paramedics must then remain with patients on ambulance stretchers until the hospital can find room for them.

Michael Sanderson, chief of paramedic services for Hamilton, Ont., and a member of the executive of the Ontario Association of Paramedic Chiefs of Ontario, says so far this year, 21,000 hours of ambulance time has been lost due to offload delays at hospitals and this is projected to rise to at least 37,000 hours of lost time by the end of the year, he said.

This means fewer ambulances are on the road, which means people who call for help in an emergency wait longer.

“If it’s not a life-threatening emergency, it could take some time before an ambulance gets there. And we’ve experienced waits of a few hours for some patients doing that,” he said.

Ontario paramedics are now concerned these problems could be further exacerbated by a major heat-related emergency, especially with some people avoiding mitigation actions, such as visiting a community cooling centre or taking kids to a splash pad, because of recent increases in COVID-19 activity, Wilton said.

Heat warnings stretch into day 2 for large part of Ontario

And heat-related calls are already on the rise.

“We’re actually seeing an increase due to the heat wave,” he said. “Every time we get an additional pressure like that, it cripples our system a little bit more.”

— with files from Global News’ Jamie Mauracher and Karen Bartko