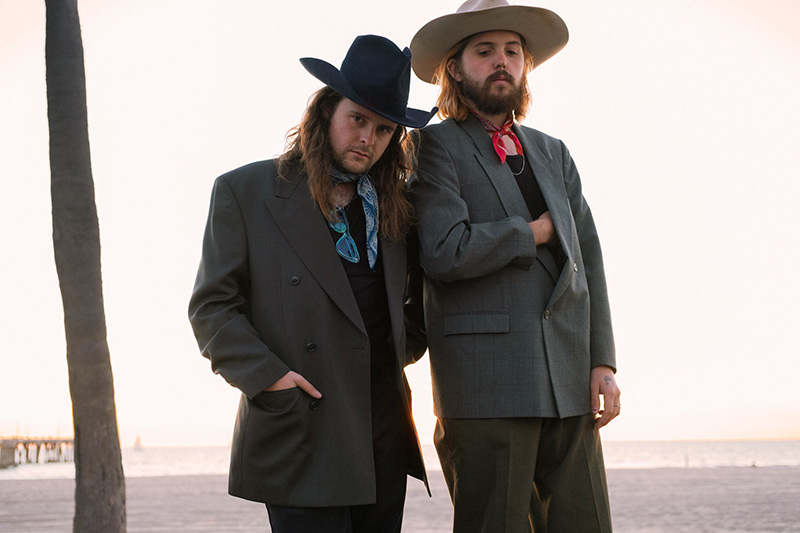 “don’t want to fight you, don’t wanna make you cry, I’ll just stay with you a while if you like…”

The folk rock dreaminess of “Desert Mama” by L.A. based Juan Wayne, the project name of singer songwriters Andrew St. James and César Maria, has my eyes closing and my heart all a flutter. The endearing spirit, the beautiful ‘around the campfire’ simplicity, the 60’s / 70’s atmospheres like a sonic scuffed up Polaroid feels like an amalgam of iconic artists like The Flying Burrito Brothers (circa late 60’s, early 70’s) and America (circa mid 70’s). I am all over this sound. Love it.

THE FACTS AS WE KNOW THEM – PRESS NOTES:

Call it the alcoholic lovechild of two roving delinquents. Los Angeles-based Juan Wayne emerged in the middle of 2018 from the dark outer recesses of the minds of songwriters Andrew St. James and César Maria while out on tour in support of the former’s 2017 solo album The Big Ole Veronica Apology Record.

Once returned home from the road and huddled in seclusion in Maria’s Koreatown apartment, the pair recorded two albums on an 8 track tape machine. Part concept, part earnest autobiographical reflection, the collaboration quickly gained traction through their native San Francisco songwriting community, resulting in live performances replete with cowboy hats and boots and a bevy of supporting players culled from acts as diverse as Tino Drima and Deltron 3030.

Their first release, Juan Wayne 1, clocks just over 16 minutes. But there in its brevity is the undeniable kismet. The duo’s lifelong friendship yields a profound connection and what results is a sorrowful lofi pop dreamscape melded together by two distinct narrative voices so intertwined – both through personal history and heartache, and shared influence – that it becomes difficult to distinguish where one ends and the other begins. Herein the root of new beginning takes shape. Best seen and heard to be believed, Juan Wayne rides.

** At this particular time we find ourselves in a financial pinch due to many factors. We want to keep AP going. It has been a passion project for over 13 years. PLEASE consider donating, we could really use the support. Thanks so much