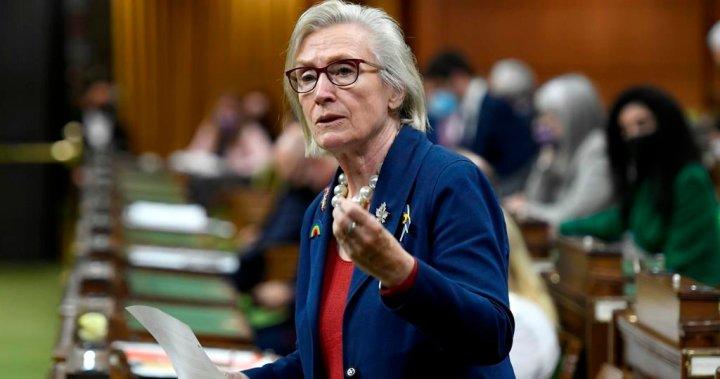 Canada’s minister of mental health and addictions says more doctors across the country should be willing to prescribe a safer supply of drugs to reduce overdoses instead of fearing they will face barriers from their regulatory colleges.

Carolyn Bennett said a guidance document by the College of Physicians and Surgeons of British Columbia could be very helpful in other provinces and territories.

“We are, I think, a bit limited at the moment, frankly, because of some of the approaches of the colleges of physicians and surgeons across the country,” Bennett told a news conference Wednesday.

“Physicians have felt that they would not be able to do this without being investigated by (their) college, unfortunately.”

The B.C. college has said physicians who prescribe pharmaceutical-grade alternatives to street drugs as part of a comprehensive treatment plan, or a stand-alone harm reduction strategy could better support patients and reduce their risk of overdose and death.

The practice is based on a policy directive developed last July by the B.C. ministries of Health and Mental Health and Addictions as part of an urgent response to the overdose crisis.

Bennett made the comments while announcing harm-reduction initiatives across Canada, including seven safer supply programs in B.C. and Ontario, involving $40 million in funding that’s already been budgeted for various programs. More than 7,500 people across the country fatally overdosed last year, she said, and it’s time that Canadians understand the role they could play in dealing with stigma related to drug use.

“From Cape Spear to Haida Gwaii, from Carcross to Windsor in southern Ontario, people are dying,” said Bennett.

She said pandemic restrictions such as gathering limits made it more difficult for people to access services, while systemic discrimination and racism in the health-care system mean people don’t seek help.

“There’s an emerging consensus that we have to do more to reverse this devastating trend, save lives and bridge the gaps that exist in our health-care systems so that more people can get the care they need,” she said.

Even in B.C., however, doctors face challenges in prescribing safer opioids.

Close to 200 people died from poisoned drugs in B.C. in May

Of 7,229 practising family physicians, 1,607 self-reported on their 2022 annual licence renewal form that they prescribe safer supply, the B.C. College of Physicians and Surgeons said.

The college said in a written response that some of its concerns include a shortage of qualified family physicians across the province, as well as limited clinical guidelines for support and training.

It also said limited clinical research in prescribed safer supply, something that’s noted in the province’s policy directive, which says an evaluation is expected to gather evidence to determine the feasibility of developing provincewide clinical guidance to support broader uptake across B.C.

“These services are not readily available in all communities. Also, the current fee-for-service payment model does not support family physicians to do this difficult work.”

In May, Bennett joined Sheila Malcolmson, her counterpart in B.C., to announce that drug users in the province will not be charged for possessing up to 2.5 grams of opioids, cocaine, methamphetamine or MDMA, also known as ecstasy, for three years. The plan is slated to start on Jan. 31, 2023, the first such move in North America.

Half of the $40 million in funding Bennett announced Wednesday is for services in Ontario, while the rest has been divided among all other provinces and Yukon.

Michael Vonn, CEO of the PHS Community Services Society, which provides harm-reduction and housing services in Vancouver and Victoria, said a new grant will allow for the installation of a technological system that alerts emergency responders if someone is at risk of overdose.

The Lifeguard Digital Health app sends an alert if a resident using drugs alone does not respond to an alert that triggers them to turn it off, something they wouldn’t be able to do if they’re unconscious. That would prompt staff to check on that person before the system calls paramedics if help does not arrive.

The system builds on a successful pilot and would benefit residents of about 1,500 units of supportive housing and 200 shelter spaces, Vonn said.