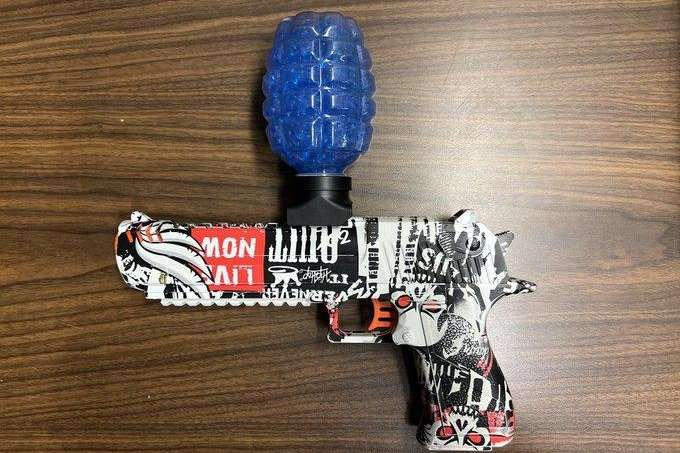 The NYPD tweeted a warning that so-called “bead blasters” that fire water gel beads from a toy gun are illegal in New York City. Photo courtesy of NYPD/Twitter

July 22 (UPI) — A correction officer in New York City has been charged with murder for the shooting death of a teen who had an illegal water gun.

Dion Middleton, 45, allegedly shot 18-year-old Raymond Chaluisant in the face while he was riding in a silver Acura on the Cross Bronx Expressway around 1:30 a.m. Thursday morning, police said.

Police sources told the New York Daily News that an Orbeez water pistol fell out of his lap when the car door was opened.

Middleton was allegedly hit in the back by the water gun and returned fire, not knowing what had hit him, police sources told WCBS-TV.

Chaluisant’s sister told the Daily News that he and his friends had been participating in a neighborhood water gun fight when he was shot dead.

“They were playing with water guns. Somebody killed them.”

“Bead Blasters shoot gel water beads propelled by a spring-loaded air pump, making them an air rifle. Air rifles are a violation in NYC and are unlawful to possess,” the NYPD said in a statement on Twitter.

“Violators found in possession of these will be issued a criminal summons and the weapon will be confiscated.”

The NYPD said in another tweet with pictures of the colorful toy guns that officers had “encountered individuals carrying these bead blasters” and that they were confiscated and summonses were issued.

Middleton, who has been a correction officer since 2003, was arrested at the firing range where he works after he failed to report the shooting and showed up to work as normal, WABC reported. He has pleaded not guilty and was released on bail.

“These very serious charges are in no way a reflection of the officers who work to keep our city safe every day,” Department of Correction Commissioner Louis Molina said in a statement.

“This officer will be immediately suspended without pay, and if the charges are true, he will face the full consequences of the law and be terminated.”