Oyster and prawns are risky. How can Canadians avoid norovirus? – National | Globalnews.ca 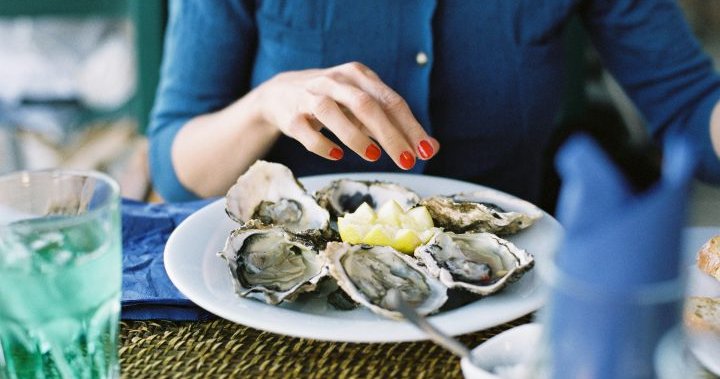 Every year, about 300 to 400 outbreak cases of norovirus are reported to the Public Health Agency of Canada (PHAC). Many often go unreported in food-service settings such as restaurants, catering events and cruise ships, according to the health agency.

Noroviruses are a group of viruses that cause gastroenteritis. Symptoms of norovirus illness include diarrhea, nausea, stomach cramps, low-grade fever, headache, chills, muscle aches and fatigue, according to Health Canada.

The health agency states that norovirus spreads through direct contact with infected individuals, such as caring for or diapering an ill child, sharing food or utensils with an ill person, touching surfaces or objects contaminated with norovirus, or eating food or drinking water that has been contaminated.

Although norovirus outbreaks are more common in the fall and winter months, the Public Health Agency of Canada (PHAC) has released a few health notices regarding norovirus outbreaks recently. The Canadian Food Inspection Agency (CFIA) has also issued food recalls related to possible norovirus contamination of seafood and raspberries over the past few months.

Most recently, on June 18 the CFIA issued food recalls for several Revive Superfood brand smoothies and oats products due to possible norovirus contamination in the raspberries used in them.

When can you catch norovirus?

While infections associated with norovirus usually peak during winters, that doesn’t mean norovirus is not an issue for summer months, says Siyun Wang, an assistant professor of food safety engineering at the Faculty of Land and Food System at the University of British Columbia.

“When people are eating raw seafood, they need to be well aware of the risk [of norovirus],” said Wang. “In summer, microorganisms, especially for bacteria, tend to actually grow faster when temperatures are higher.”

Since shellfish are filter feeders — they strain small pieces of prey and food particles that may contain biotoxins from moving water— they have a tendency to accumulate toxins inside them, Wang explains.

“Among the shellfish, I would probably say oysters do pose a much higher risk [of norovirus] because many people like eating oysters without cooking them,” said Wang.

Wang says that norovirus contamination of sea life is very strongly associated with human activities as it is a human-borne virus.

0:52
What you need to know about the norovirus, gastrointestinal illnesses linked to raw oysters

What you need to know about the norovirus, gastrointestinal illnesses linked to raw oysters – Apr 19, 2018

A 2018 study by the BC Centre for Diseases Control found that sewage from fishing boats contaminated some oyster farms on Vancouver Island, causing the 2018 norovirus outbreaks.

“Because norovirus can actually be carried by humans, the sewage that are discharged to the sea water can potentially have a very high level of viral particles,” said Wang.

Ian Young, an associate professor in the School of Occupational and Public Health at Toronto Metropolitan University, gives an example of how oysters are exposed to norovirus contamination.

He says the water where the contaminated oysters are harvested can be from “some kind of human sewage release,” — possibly a sewer overflow event in cities after extreme rainfalls.

Young says there could also be “an issue with the wastewater treatment facilities in which some amount of untreated or minimally treated sewage” get released to the water, contaminating harvest areas.

Although the source of contamination of the recently recalled raspberries products is yet to be known, according to Health Canada, foodborne outbreaks of norovirus illness likely happen when food is contaminated by infected food handlers, especially if they do not wash their hands properly after using the bathroom.

How can Canadians avoid infection from norovirus?

Young says to avoid getting infected with norovirus, consumers should check if there are any recalls before purchasing products.

According to Wang, cooking is “probably the best way to actually get rid of these pathogens,” however, some studies have shown that even cooking cannot 100 per cent eliminate norovirus.

“That’s actually another very tricky thing about norovirus because it’s overall a very stubborn pathogen that’s really hard to get rid of,” said Wang. “But that being said, it’s still going to make the seafood much safer [to consume] by cooking them thoroughly.”

According to Health Canada, noroviruses are able to survive relatively high levels of chlorine and different temperatures.

Wang adds that it can be especially risky if individuals harvest their own shellfish because often contamination closure notices go ignored.

“Fisheries and Oceans Canada actually have signs set up to remind people to not fish in certain (coastal) areas,” she said. “These areas are more heavily contaminated and seafood that is harvested from these areas is more likely to have a higher level of contamination or biotoxins or bacterial pathogens.”

The fisheries agency advises Canadians to always check for marine biotoxin and sanitary contamination closures in the areas where they want to harvest shellfish, noting that “closures can change often throughout the year.”

The Supreme Court Just Made It Way Easier to Pollute