Patients with rare eye cancer travel cross-country for treatment: ‘This was traumatizing’ | Globalnews.ca 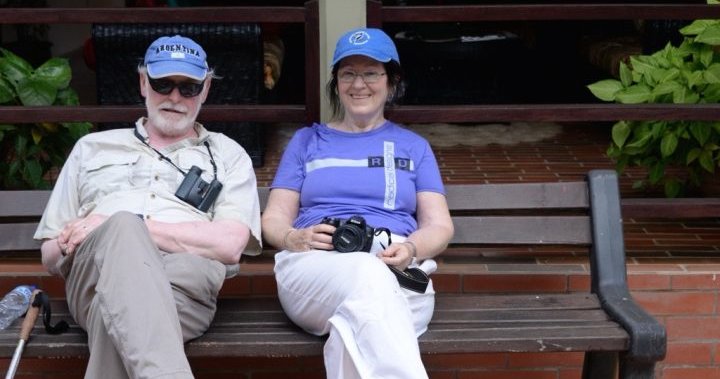 When Sue Johnson found out she had uveal (ocular) melanoma 18 months ago, she didn’t know her search for treatment would take her thousands of kilometres from her home in Victoria.

“I’ve done some very hard things in my life. I travelled to different foreign countries to adopt children in the middle of a war. But this was breathtakingly difficult,” the 74-year-old clinical psychologist told Global News.

In Canada, just about 200 cases are diagnosed each year, according to national advocacy group Save your Skin.

It’s also quick and aggressive and often spreads to the liver.

“Quite often when patients are diagnosed with metastatic disease, there isn’t long enough for them to have the opportunity to participate in a treatment or trial,” said Natalie Richardson, operations manager at Save Your Skin.

Treatment for late-stage ocular melanoma is scarce but a new drug, recently approved by Health Canada, has patients travelling great distances for a chance at survival.

Six months into Johnson’s cancer journey, after radiation was unsuccessful, she had her left eye removed. Another half-year later, scans revealed what she had hoped would never happen — the melanoma had spread.

It is a weekly immunotherapy infusion aimed at stopping a tumour from growing.

“What this drug does is find a melanoma cell and scream out to your to your immune system, ‘Here is the bad guy!’” Johnson explained, chuckling, “your immune system comes along and says, ‘Oh, there it is,’ and goes for it.”

Tebentafusp is also offered in Alberta, but because of the COVID-19 pandemic, out-of-province patients were not being admitted.

This left Johnson with only one option

“I was told that really nobody had a handle on treatment,” Johnson said. “Toronto was the only place in Canada that I could get this drug.”

In the thick of the pandemic, Johnson and her husband travelled more than 4,000 kilometres to Toronto.

“One of the challenges for this drug (is) it requires special procedures for administering the drug,” Butler explained.

“Toxicities can occur that need to be managed carefully, so you’re not going to have every single cancer centre able to administer the drug.”

It’s a significant step for those searching for treatment in the future, but it doesn’t mean it will be widely available right away.

“We are pleased to provide patients in Canada and Australia with access to this breakthrough therapy,” said Meir Jakobsohn, Founder and CEO of Medison.

Medison says eventually 24 markets in Canada with have accessibility.

In late January, the U.S. Food and Drug Administration approved tebentafusp for use in uveal melanoma patients and in April, regulators in the EU followed suit.

A study in the New England Journal of Medicine revealed that treatment with the drug resulted in “longer overall survival” in uveal melanoma patients versus the control group: 73 per cent at the year mark, compared to 59 per cent.

As the pandemic eases, patients have more options

Candyce Charles, who also has ocular melanoma, lives just outside of Toronto and has also been receiving the weekly infusions at Princess Margaret hospital.

The 51-year-old said she has met patients from Quebec, British Columbia and Nova Scotia.

“Imagine you’re diagnosed with something that’s extremely rare and there are only one or two cancer centres in the entire country that can treat you. It’s not ideal,” she said.

“It really needs to be widely available to patients.”

As COVID-19 restrictions ease and infection numbers and hospitalizations fall, there have been more options.

Butler said the treatment is now being offered in not only Toronto and Edmonton but Quebec, Halifax, Vancouver and Victoria, too.

“We’ll still have situations where people live in rural areas and will need to travel, especially for that in-patient piece because it’s not really safe to have zero experience with this drug,” he said.

Even though Johnson is thankful to be back home and receiving treatment, the process hasn’t been seamless.

“Right now the hospital here in Victoria is having trouble getting the drug for my infusion, which is very, very, very anxiety-producing for me,” she said, adding that our health-care system needs to work collaboratively between provinces.

Johnson also hopes the life-saving treatment becomes accessible to everyone, no matter where they live.

“Emotionally, we have this attachment to our sense of safety and belonging,” she said.

“And when you take that away at the same time as scare the hell out of people, this has a huge emotional toll. I don’t think our medical system ever really looks at that, actually.”