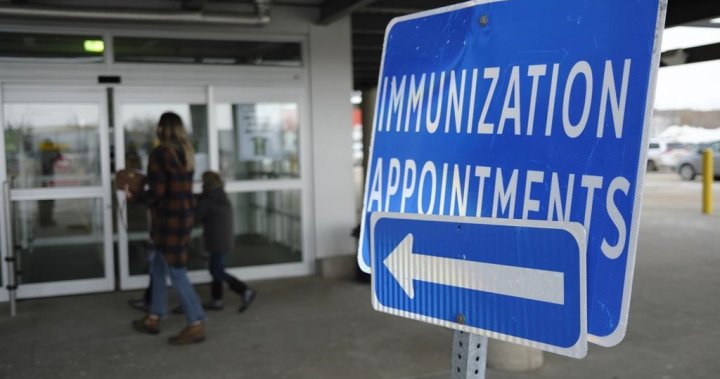 A majority of Canadians remains supportive of COVID-19 vaccine booster doses to better protect themselves from the virus, a new poll shows — even though the number of people actually rolling up their sleeves for additional shots has stalled.

The Ipsos poll conducted exclusively for Global News found 66 per cent of those surveyed said they would take a booster shot without hesitation, and three-quarters agreed that boosters reduce the risk of hospitalization.

Yet just 49 the population has actually received an additional dose after completing their initial two-dose series, according to federal data, a rate that has remained stable for several weeks.

“The urgency around this is not what it was, say, a year or 18 months ago,” said Darrell Bricker, CEO of Ipsos Public Affairs.

“There’s an intention to get boosted … but there doesn’t seem to be an urgency to do it.”

4th COVID-19 dose: What is the value of an additional booster?

The results echo the national statistics, with 43 per cent of respondents saying they have had three vaccine doses so far, while just 15 per cent said they have had four — higher than the nine per cent reported by the Public Health Agency of Canada.

Despite the strong support for boosters, the poll also found 53 per cent of Canadians surveyed are concerned about the long-term effects of taking multiple booster shots, and how many they’ll have to take in the future.

However, that number has dropped three points since January. So has the percentage of Canadians who say they are worried about the health implications of getting COVID-19, which is down eight points to 61 per cent of respondents.

“That emotional need to say, ‘I’ve got to get (the vaccine) to save my life at this moment’ isn’t today what it was when we first started making vaccines available,” Bricker said.

“It’s starting to look more like what people think about flu shots, as opposed to something that is a protection against something that could be really, really urgently deadly. So it’s becoming part of what people see as, I’m afraid to say, almost like (a part of) normal life.”

The poll comes after the National Advisory Council on Immunization advised last month that Canadians — particularly those with a higher risk of serious illness from COVID-19 — should be offered a booster ahead of an anticipated fall wave of the pandemic, regardless of how many doses they have already had.

Public health officials say an additional booster will further strengthen immunity against present and future variants of the virus, which have proven to be more transmissible than previous strains.

Provinces and territories have begun opening up eligibility for further boosters to all adults, with officials saying they want to prevent another surge in hospitalizations and deaths.

The Ipsos poll found older Canadians are more likely to be supportive of boosters and fearful of COVID-19 than younger Canadians.

That appears to align with provincial data that shows boosters have been much more popular with older Canadians. In Ontario, Alberta and British Columbia, for example, intake of third doses among residents 70 and over has surpassed 85 per cent, while less than half of those under 40 have received their first booster.

Unsurprisingly, the poll also found respondents who are not vaccinated at all — just 12 per cent of those surveyed — or have only received one dose are more skeptical of boosters, with 60 per cent saying additional shots aren’t helpful. Only 25 per cent of those who have gotten a booster agreed with that statement.

Yet the poll noted a majority of those with two doses but no booster agreed the extra shot will help prevent infection and hospitalization. Over 70 per cent of those respondents said they received their second shot six months ago or longer, while 46 per cent said they would get a booster without hesitation — suggesting many Canadians may get another dose soon.

Bricker says he expects future campaigns by public health officials encouraging people to get boosters will ultimately be successful, so long as there’s proper communication and access is eased.

“Again, the intention is there among the public. They just need to be reminded about the need to do this … and that there’s an easy path to doing the right thing,” he said.

These are some of the findings of an Ipsos poll conducted between July 12-13, 2022, on behalf of Global News. For this survey, a sample of 1,001 Canadians aged 18+ was interviewed. Quotas and weighting were employed to ensure that the sample’s composition reflects that of the Canadian population according to census parameters. The precision of Ipsos online polls is measured using a credibility interval. In this case, the poll is accurate to within ± 3.5 percentage points, 19 times out of 20, had all Canadians aged 18+ been polled. The credibility interval will be wider among subsets of the population. All sample surveys and polls may be subject to other sources of error, including, but not limited to coverage error, and measurement error.