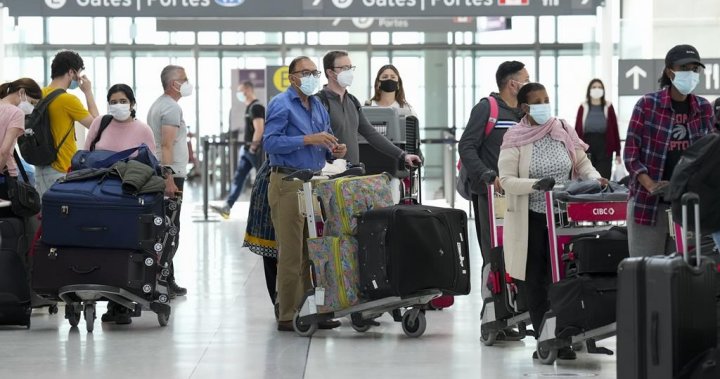 Wait times and tarmac delays for arriving flights at large airports improved immediately after the move went into effect Saturday, according to the Canadian Airports Council and the Greater Toronto Airports Authority.

“But there’s still a lot more work to do, as there were still gate holds, albeit for shorter periods of time. In our business we never want to see people waiting on the tarmac.”

On Friday, Ottawa announced it would pause COVID-19 tests of inbound international passengers selected at random, and that mandatory rapid tests for unvaccinated arrivals will happen off-site starting July 1.

The airports council and other industry groups are now calling for an end to vaccine mandates for passengers and aviation, security and customs employees, saying that hundreds more workers could be back on the job amid a labour crunch.

The government continues to bar most unvaccinated foreigners from entry and requires unvaccinated Canadians to quarantine for 14 days when they return.

After laying off security personnel during pandemic, Ottawa said the country’s airport security agency has hired 865 screening officers since April, with more to come as Canada’s four largest airports gird for a 50 per cent rise in traveller numbers within weeks.

As of June 1, those hubs were processing an average of 56,000 inbound passengers from abroad each day _ more than half of them at Toronto’s Pearson airport, where scenes of endless queues and traveller frustration played out all spring. The figure will hit 80,000 within weeks, the airports council forecasts.

“People can expect longer wait times in summer, but we shouldn’t see anything like we’ve seen the past month. I think we’re getting over that hurdle,” Pasher said.

The Canadian Travel and Tourism Roundtable welcomed Ottawa’s latest rollback, but was not quite so optimistic on its impact.

“Domestically, Canada’s travel rules are hurting small businesses, unfairly impacting families looking to enjoy the summer travel season and forcing the cancellation of conferences and events that help power local economies,” the roundtable, made up of industry groups, said in a statement.

On top of vaccine mandates, the trade organization is demanding Ottawa lift COVID-19-related questions from the ArriveCan app to speed up lines at the airport. Instead, the government said Friday it would station extra Public Health Agency of Canada workers at airports to verify that travellers have filled out the questions and offer help to those who need it.

“You can’t say to millions of Canadians that you cannot get on a train or a plane but you can take a bus or the subway if you want,” he said in an interview from the Ottawa airport. “It appears as if the mandates are being used more to punish than to protect.”

The testing pause comes at the same time the U.S. Centers for Disease Control and Prevention announced the government would drop COVID-19 tests as a requirement for entry— a measure Canada has already phased out.

“Canada is the only remaining country with a domestic vaccine mandate,” said Suzanne Acton-Gervais, who heads the National Airlines Council of Canada.

5:40
Travellers have options aside from Pearson International Airport

Travellers have options aside from Pearson International Airport

More than 50 countries have scrapped all COVID-19-related travel restrictions and more than 100 have lifted vaccine requirements for international travellers, she said in an email.

Greater Toronto Airports Authority spokeswoman Tori Gass says that for now “it appears the removal of the random mandatory tests has made a difference,” along with shored-up staffing levels.

In May some 490,810 passengers— about half of all inbound travellers from abroad— were held up after arriving on international flights at Pearson airport, facing delays as they sat on the tarmac or went through staggered off-loading to ease pressure on overflowing customs areas, according to figures provided by the authority.

In total, some 2,700 flights arriving from outside the country were delayed at Pearson last month, versus four planes— and a few hundred passengers — in May 2019.

The problem is not unique to Canada. International hubs such as London’s two main airports and Amsterdam’s Schiphol Airport regularly see hours-long bottlenecks due to staff shortages and the global travel rebound that feeds off two years of pent-up demand.