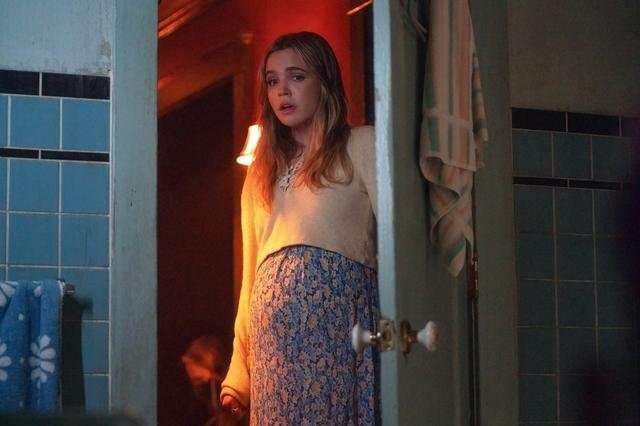 In 1999, Millwood High mean girls bullied Angela Waters (Gabriella Pizzolo) so badly that she jumped to her death in the middle of a Y2K dance. In the present, Imogen’s (Bailee Madison) mother gets a threatening note from the mysterious A.

Imogen’s mother dies by suicide in the pilot, putting Imogen in a fraught state as the new school year begins. Imogen is six months’ pregnant, which leads other classmates to ostracize her.

A is now taunting Imogen and her friends, but that’s not their only problem. Karen (Mallory Bechtel) will also sabotage anyone she sees as a threat to her status as the queen of the school.

Original Sin establishes all of the new characters well. You know exactly who Imogen and Karen are from the start, and it doesn’t take long to get to know Mouse (Malia Pyles), Noa (Maia Reficco), Faran (Zaria) and Tabby (Chandler Kinney).

Tabby is a film buff who works in a movie theater. She has to deal with obnoxious film bros on top of Karen and the stalker.

Faran is Karen’s competition in ballet class. Mouse is an animal lover, and Noa is pegged as a troubled teen because she wears an ankle bracelet and has to take daily drug tests.

Being targeted by Karen brings this disparate group of girls together, and that’s before they even realize A is after all of them. They deal with real issues exacerbated by the modern world’s access to social media and lack of privacy.

Since Original Sin is for HBO Max, the language can be more realistic than the previous show on Freeform. These characters say the F-word and C-word, and locker room scenes show extras full frontal.

Original Sin also creates suspense with a stalker appearing at freaky moments. They keep the stalker mysterious so the viewer doesn’t know too much.

Is this masked figure A or working for A? In the meantime, he’s got plenty of random characters he can slaughter to freak out the leads even more.

The teen sabotage is intense, too. There are sharp objects hidden in vulnerable places and dead animals hidden in unsettling places.

Pretty Little Liars: Original Sin introduces audiences to a diverse group of relatable characters. They don’t deserve to go through this hell, but seeing them go through hell is part of the fun.