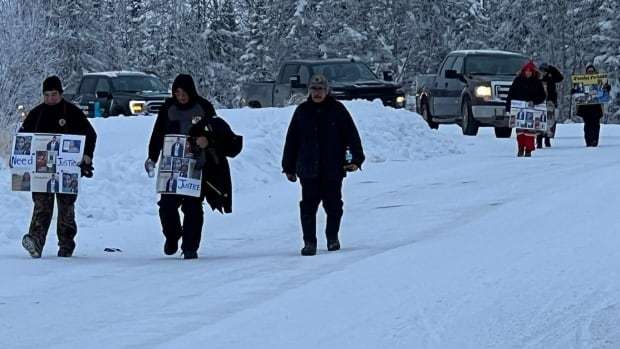 A group of community members from a northern Manitoba reserve gathered Wednesday at the spot where a 15-year-old girl was found brutally beaten to death a decade ago, calling for justice for Leah Anderson — whose killing remains unsolved.

The Cree teen left her aunt’s house in Gods Lake Narrows on Jan. 4, 2013, saying she was going to skate with friends at the local rink.

While her injuries were so severe people initially believed she had been mauled by dogs, police later determined her death was a homicide.

However, no one has yet been charged in connection with her death.

“We’d like to know if they’re still active on the case. We don’t really know.”

During Wednesday’s memorial, some walked while others followed in vehicles, Watt said. They offered prayers and songs near the spot where Leah’s body was discovered.

“It’s really great that they spoke up for my sister that way,” Tiffany Anderson told CBC. “I’m glad to know that they’re still thinking about her as much as I do.”

She remembers her sister as a bright girl and genuine soul who was like “the sunshine in the room.” Leah’s killing has been difficult for all of her siblings, Tiffany said.

She said she spoke with police about the investigation into her sister’s death last year but was given the same information she’d previously received.

She wants RCMP to return to Gods Lake Narrows and keep investigating what happened the night Leah was last seen alive.

‘People wonder why somebody hasn’t been caught’

The northern Manitoba community, which is 250 kilometres southeast of the city of Thompson, is only accessible by air or by ice road in the winter.

“People wonder why somebody hasn’t been caught, especially in a small fly-in community,” said Watt.

Given that the community’s ice road was closed when Leah was killed, it was very likely the person responsible was still in the community in the days following, Manitoba RCMP said in a 2017 Facebook post.

Police also said in that post they had “made significant advancements in the investigation … narrowing down the suspects and determining that the killer was a male and known to Leah.”

However, the last time RCMP met with the community to discuss the case was in 2020, said Watt.

He said community members are hoping someone will come forward and identify Leah’s killer so that her community and family can have closure.

Wednesday’s event was also a way to put pressure on RCMP to be more transparent about their investigation, he said.

“A lot of people feel that they’ve forgotten all about it.”

Manitoba RCMP Staff Sgt. Chris Johnson told CBC he plans to go to Gods Lake Narrows in the coming weeks to speak with the community about Leah’s case.

However, “with an ongoing investigation, there’s always nuances of that investigation that we’re not going to discuss with the public,” said Johnson.

“It is a difficult investigation,” and time is never on an investigator’s side, he said.

But significant investigation was done from the beginning and none of the information collected over the last 10 years has been lost, Johnson said.

The 10th anniversary of Leah’s killing would certainly be a period of self-reflection for the person responsible, he said.

“It is easier to take the coward’s route,” said Johnson. “However, in doing that, they carry a heavy burden with them for the rest of their life.”

The years that have passed since the teen’s death have been difficult for her family and community, as well as for the investigators working to solve the case, said Johnson.

“It’s certainly a tragic thing that has occurred. A young lady had the rest of her life to look forward to.”

While she still wants to see justice for her sister, 10 years later, Tiffany’s message to her sister’s killer is one of forgiveness.

“If I could say something to that person, I would let them know that I already forgave them,” she said.

“I hope that they find peace with themself after living with something like that.”