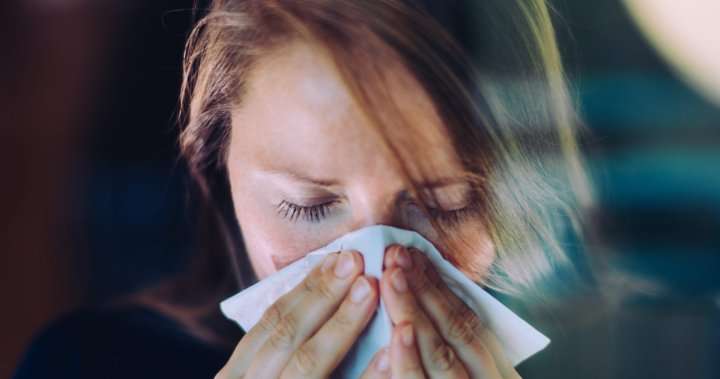 Canada is entering an influenza epidemic as cases of the flu rise further beyond the seasonal threshold, the Public Health Agency of Canada (PHAC) reported Monday.

The latest weekly percentage of positive influenza cases rose from 6.3 per cent in last week’s report to 11.7 per cent — more than double the seasonal threshold of 5.0 per cent.

The amount of flu cases being reported indicates “the start of an influenza epidemic at the national level,” the PHAC report says.

Nine regions across Ontario, New Brunswick, Alberta and Saskatchewan reported localized influenza activity during the most recent reporting week of Oct. 30 to Nov. 5. Those provinces along with Quebec, Nova Scotia and Prince Edward Island also reported sporadic activity across 22 regions.

British Columbia, Manitoba and Nunavut did not report data to PHAC. The B.C. Centre for Disease Control’s latest respiratory epidemiology report noted influenza cases are also on the rise there, but did not give specific numbers.

Between Oct. 30 and Nov. 5, 2,234 laboratory detections of flu were reported. Among cases where ages were reported, 64 per cent were among patients under 20 years old. To date, more than half of all cases this year have involved children and teenagers.

The new report came on the same day that Ontario’s chief medical officer of health strongly recommended residents wear masks indoors to protect against what he called a “triple threat” of influenza, COVID-19 and respiratory syncytial virus (RSV).

Dr. Kieran Moore’s advice came as pediatric hospitals have been overwhelmed in recent weeks by a massive influx of very sick patients. Moore noted during his news conference that capacity in children’s hospitals is at 100 per cent.

Some major children’s hospitals in the province have had to cancel non-urgent surgeries in order to redeploy staff to the emergency department and intensive care units that are operating over capacity.

The Children’s Hospital of Eastern Ontario has opened a second pediatric ICU, SickKids hospital is cancelling non-urgent surgeries, and children 14 and older needing critical care are being sent to adult ICUs.

Meanwhile, in the United States, an early spike in influenza cases has pushed hospitalization rates to the highest mark in a decade for this time of year, U.S. health officials said early this month.

Is it cold, COVID or the flu? Experts say its ‘very difficult’ to differentiate

Public health experts have urged people to get their flu shot and to also ensure they get the latest bivalent COVID-19 vaccine booster to stay protected amid the colder months.

In Canada each year, the flu causes an estimated 12,200 hospital stays, according to the federal government. It is also among the 10 leading causes of death in the country, taking the lives of approximately 3,500 people each year.

The latest PHAC report said so far this year, “less than five” influenza-associated deaths have been reported.

— with files from Global’s Irelyne Lavery and the Canadian Press