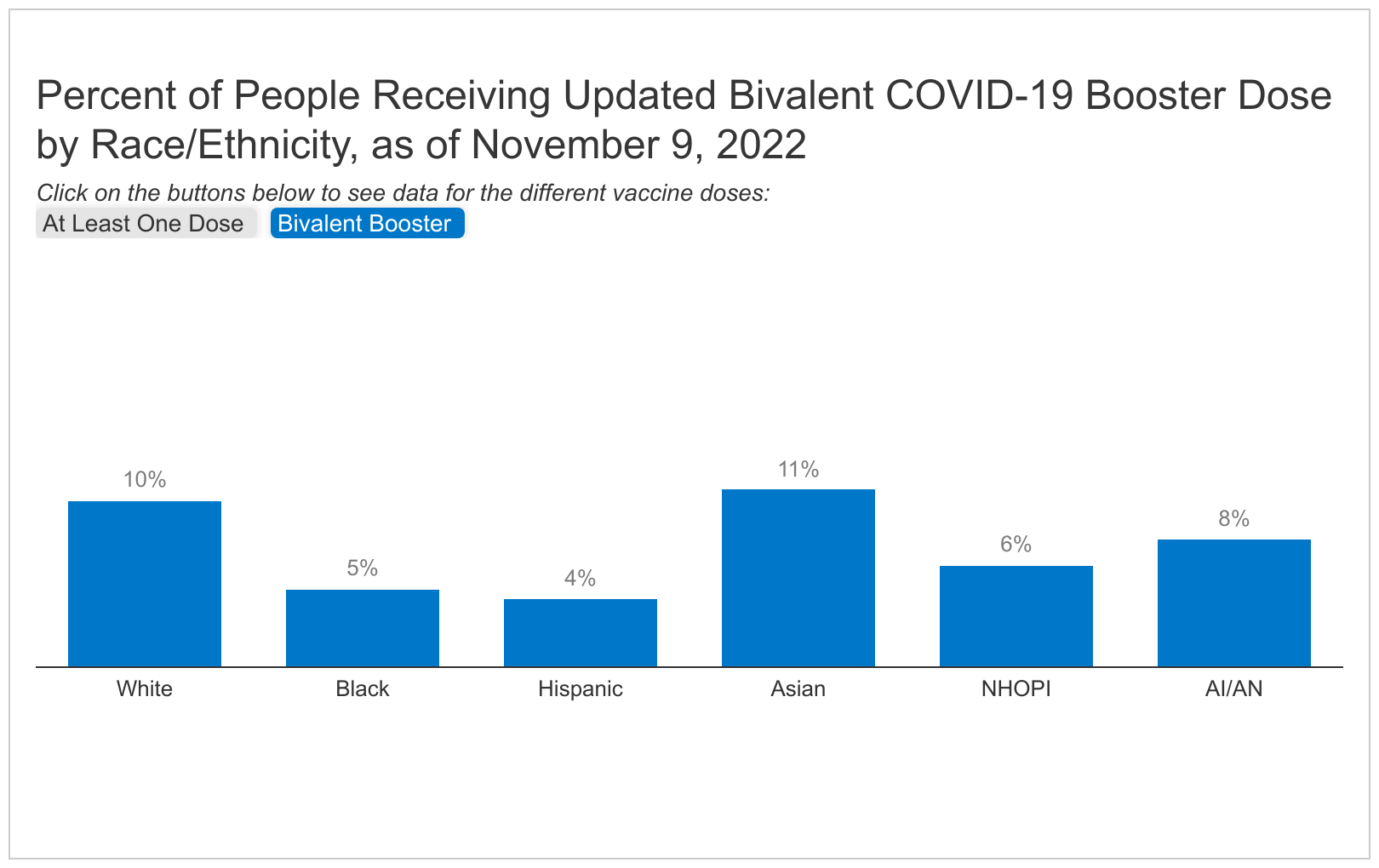 As the United States enters its third holiday season navigating a potential increase in COVID-19 cases as well as other respiratory illnesses, federal data from the Centers for Disease Control and Prevention (CDC) show that as of November 9, 2022, 80% of the total population in the United States have received at least one dose of a COVID-19 vaccine and only 10% of eligible individuals have received the updated, bivalent booster that was authorized for use among individuals 5 years of age and older in early Fall 2022. Individuals who have not received any booster dose are at higher risk of infection from the virus, and people who remain unvaccinated continue to be at particularly high risk for severe illness and death.

Over the course of the pandemic, racial disparities in cases and deaths have widened and narrowed. However, overall, Black, Hispanic, and American Indian and Alaska Native (AIAN) people have borne the heaviest health impacts of the pandemic, particularly when adjusting data to account for differences in age by race and ethnicity. While Black and Hispanic people were less likely than their White counterparts to receive a vaccine during the initial phases of the vaccination rollout, these disparities have narrowed over time and reversed for Hispanic people. Despite this progress, a vaccination gap persists for Black people. COVID-19 outpatient treatments, which can mitigate hospitalization and death from COVID-19, are also available. However, early data suggest racial disparities in access to and receipt of these treatments.

This data note presents an update on the status of COVID-19 cases and deaths, vaccinations, and treatments by race/ethnicity as of Fall 2022, based on federal data reported by the Centers for Disease Control and Prevention (CDC).

What is the status of COVID-19 cases and deaths by race/ethnicity?

What are COVID-19 vaccination and booster patterns by race/ethnicity?

What are COVID-19 treatment patterns by race/ethnicity?

New data from CDC show racial disparities in receipt of COVID-19 oral antiviral treatments, including Paxlovid, the most widely prescribed antiviral. As of November 2022, there are four COVID-19 outpatient treatments, including: Paxlovid and Lagevrio, oral antivirals that were both approved in December 2021; Veklury, an IV infusion antiviral that was approved in January 2021; and Bebtelovimab a monoclonal antibody that was approved in February 2022. Outpatient COVID-19 treatments are recommended for people who have tested positive for COVID-19 with mild to moderate symptoms and who are at high risk of developing severe illness. Prior KFF analysis pointed to potential disparities in access to COVID-19 treatments for counties with the highest poverty rates and those that are majority Black, Hispanic, and AIAN. Other analyses have documented disparities in monoclonal antibody treatments by race and ethnicity as well as disparities in oral antiviral treatment by zip-code vulnerability. An October 2022 CDC Morbidity and Mortality Weekly Report adds to these findings showing that, through July 2022, people of color were less likely to receive currently available outpatient antiviral COVID-19 treatments compared with their White counterparts. Specifically, between April to July 2022, the percentage of COVID-19 patients aged 20 years and older treated with Paxlovid was lower among Black (21%) and Hispanic (21%) patients than among White (32%) and non-Hispanic (30%) patients, respectively (Figure 3). The shares of AIAN and NHOPI (25%) and Asian (26%) patients receiving prescriptions were also smaller compared to the share of White patients. These disparities were observed across all age groups and were more evident among adults ages 50 and older and immunocompromised patients. Racial and ethnic disparities existed for treatment with other medications, but differences were small given overall low levels of treatment with these other medications.

While disparities in cases and deaths have widened and narrowed over the course of the pandemic, age-adjusted data show that AIAN, Black, and Hispanic people have had higher rates of cases and death compared with White people over most of the course of the pandemic and that they have experienced overall higher rates of infection, hospitalization, and death.

Data point to significantly increased risks of COVID-19 illness and death for people who remain unvaccinated or have not received an updated bivalent booster dose. During the initial vaccine rollout, Black and Hispanic people were less likely to receive vaccines than their White counterparts. However, these disparities have narrowed over time and reversed for Hispanic people, though they persist for Black people. Despite this progress in initial vaccination uptake, overall uptake of the updated bivalent booster dose has been slow so far, and there have been racial disparities in receipt of these booster doses, with eligible Black, Hispanic, and NHOPI people about half has likely to have received an updated booster than their White counterparts. Data also point to disparities in receipt of COVID-19 treatments, with patients of color less likely to receive oral antivirals, including Paxlovid, compared to White patients.

Overall, these data show that although the pandemic has contributed to growing awareness and focus on addressing racial disparities, they persist, reflecting the underlying structural inequities that drive them. The findings highlight the importance of a continued focus on equity and efforts to address inequities that leave people of color at increased risk for exposure, illness, and death as well as to close gaps in access to health care, including COVID-19 treatments. Addressing these gaps is of increasing importance as these disparities may be exacerbated when federal funding for COVID-19 vaccines, treatments, and tests runs out and some people may face increased out-of-pocket costs to access these services. Addressing these inequities is key for narrowing the disparate effects of COVID-19 going forward as well as for preventing similar disparities associated with future public health threats.