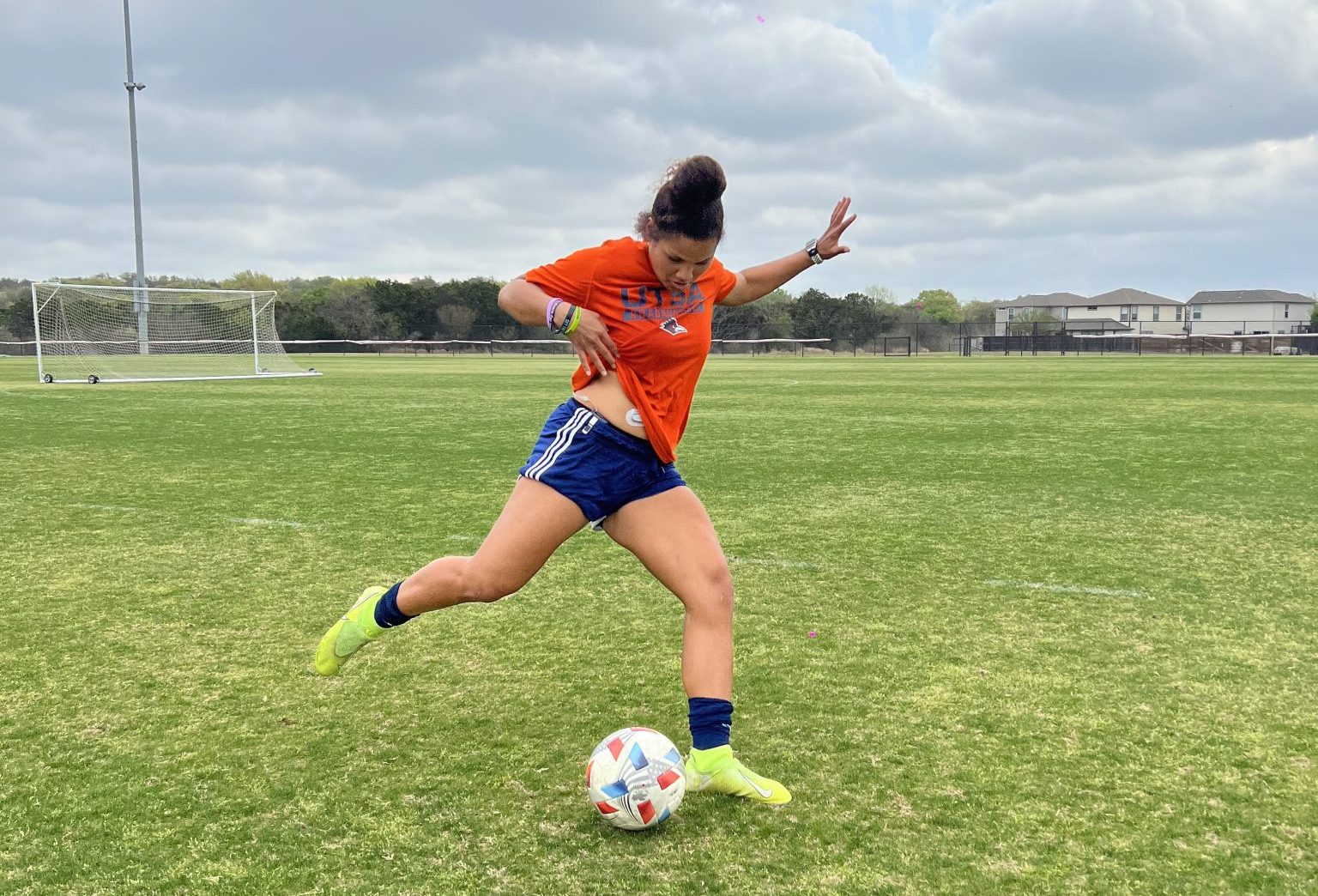 There’s no doubt about it — type 1 diabetes makes sports very complicated. We have to stay constantly mindful of our blood sugar levels, food intake, and insulin use. It’s a distraction even at the best of times. At worst, it can completely ruin a workout or competition. Many athletic careers have been cut short because the condition was just too difficult or frustrating to manage.

Marlee Fray has been through it all before. She’s had type 1 diabetes for almost all of her life. She’s enjoyed a smashing youth soccer career, but it still took her years to really come to terms with her diabetes management and what it meant for her athletic career.

Marlee plays forward and midfield for the University of Texas at San Antonio and the Jamaican national youth team. She’s from a family of soccer nuts (her brother plays for Inter Miami in the MLS). She’s super talented, but her success didn’t come easy. It required growing up and getting serious about blood sugar management.

We were excited to talk to her.

Diabetes Daily: Tell us about the beginning of your life with type 1 diabetes.

Marlee Fray: I was diagnosed when I was two years old. I say that I’m one of the lucky ones, because I never knew what it was like growing up without diabetes. It’s all I knew.

When I was a kid, everything was scripted out. I had to eat this amount for breakfast, this amount for lunch… and I had two brothers, both normal, and they could eat whatever they wanted. It was hard on my parents. They got judged. Nobody else understood.

When I got into sports, I had to figure out how to manage my diabetes at the same time. I didn’t know anyone else who had diabetes who also played sports.

DD: Did it ever feel like diabetes was holding you back?

MF: At some points, yes.

When I was going through middle school and high school, I played on an academy team. It was very hard. My coaches had no idea what diabetes meant or anything that was going on with me while I was performing. Many times I had to be taken off the field. It wasn’t my talent, it was because my blood sugar was in the 500s, and I couldn’t process or move. Or my glucose levels were too low, and I couldn’t focus.

There was a very long, rough period of time where I couldn’t figure out how to manage that. Some coaches couldn’t understand it, they’d get angry, and I took that out on myself. “Why can’t I play like my teammates are playing all the time?” It was hard for a long time.

DD: Were you ever embarrassed by your condition?

MF: Most people didn’t know I was diabetic because I hid it so well. It wasn’t that I was embarrassed, I just didn’t want the questions. “Why do you have a wire, what’s stuck to your hip?” I was very good at tucking my pump into my shorts. Only my teacher and the nurse at school knew that I had diabetes.

DD: When did you get your first continuous glucose monitor (CGM)?

MF: I fought it for the longest time. I really didn’t want another patch on my body. My doctors kept bringing it up every time I saw them. Finally, going into my junior year of high school, my doctors convinced me to try it for a couple months. By that time, I realized that something had to change or I was gonna go down a bad slope, with how my levels were doing.

It was touch and go at first. Trusting the numbers on my phone and on the device, that was freaky. I got the hang of it, but it was still rough figuring out how to balance being an athlete and having diabetes.

DD: When did you finally put together all the pieces?

MF: It was in my freshman year of college that I really tied down. That’s when my athletics program took my health to a new level. My nutritionist and my trainer were super, super hard on me. They told me, “You need to get this under control, or else you’re not going to have a career.”

I took it to heart. We fine-tuned my life, and how to manage my diabetes.

When I transferred to UTSA, everything just clicked. I finally found my rhythm of working with my CGM and learning how to perform at my best.

It did take a lot of my life to get there.

DD: What blood glucose level do you want to be at when the whistle blows?

MF: A lot of my doctors don’t like how low I want to start a game. But the way my adrenaline runs, my blood sugar usually spikes during a match. So usually I try to keep myself in a normal target range, around 130 mg/dL, steady throughout the day. When game time comes, I would like to be around 75-80, because I know that the adrenaline will spike it. If I can start at that range, I know my blood sugar will be perfect for the whole match. If I start higher, there’s no coming down.

DD: Do you have anyone else tracking your CGM measurements while you’re out playing?

MF: I mostly take care of it myself. I keep my phone in my athletic trainer’s medical kit. If I ever run off the field, or if there’s a water break, I can pull it up really quickly. She lets me be responsible for my own stuff. If I need her to hold my phone on the sideline and check, she will, but most of the time I’m fairly confident of my glucose levels. She also carries a regular glucose meter in her kit, just in case something seems off with the CGM.

There’s actually another diabetic on the team with me. She helped me embrace being diabetic. I still hid it a little bit, because I didn’t want anyone to think that I wasn’t capable. We check on each other throughout the day and the game.

DD: Tell me about your worst blood sugar nightmare on the pitch.

MF: I’ve had a few! In college, I had one in an intense practice. I had just gone to the endo the day before to adjust my basal rates, so usually the next day means getting used to it.

Our coach was explaining this high-intensity drill, and my eyes were all over the place, I was confused, my hands were shaking. I didn’t take myself out. My trainer noticed and said, “you’re not okay.” We checked and my sugar was as low as can be.

I was new to the team and I wasn’t comfortable yet with stepping out real quick to check.

DD: So, does everyone on the team know now?

MF: Everybody knows. I’m loud and proud now. It’s cool because everybody asks questions, and they want to know more, and I love explaining what I go through.

DD: Tell me about your diet on gameday.

MF: I eat what the rest of the team eats, which is usually chicken or salmon with rice and vegetables. But I don’t like to eat much close to a game, so I’ll have the meat but only some of the rice.

Some of my teammates love to have a snack before the game, but not me. If I need to have something, I’ll have one or two energy gummies. They’ve got a lot of carbohydrates, but one or two don’t spike my sugar too much.

DD: What’s next for you?

MF: I’m focused on finishing out this year, playing one more year for UTSA next fall, and then I would love to play professionally somewhere overseas or in the United States. I want to do it as long as I can.

My whole family is soccer. Both my parents grew up playing, they met playing soccer in college, me and my two brothers played soccer. I love the grind of it, and I don’t want to give that up.

I’m a psychology major and I’ve also looked into becoming a sports psychologist. I’ve been through four knee surgeries, so with that and the diabetes, there were a lot of tough times both on and off the field. I love talking to people about what I can do to help them, and having worked with a sport psych, I can really see the impact. I’ve also played around with just being a soccer coach. I love the game so much that I don’t think I can leave this sport. Whatever I end up doing next, it will tie into soccer.

DD: Finally, tell me about Dexcom U.

MF: They want me to be a role model. They told me, “You’re gonna be the one helping these young kids who have diabetes and want to be athletes.” Or even teaching coaches and teachers and trainers how to help athletes with type 1. I love that concept. That’s what Dexcom U has become.