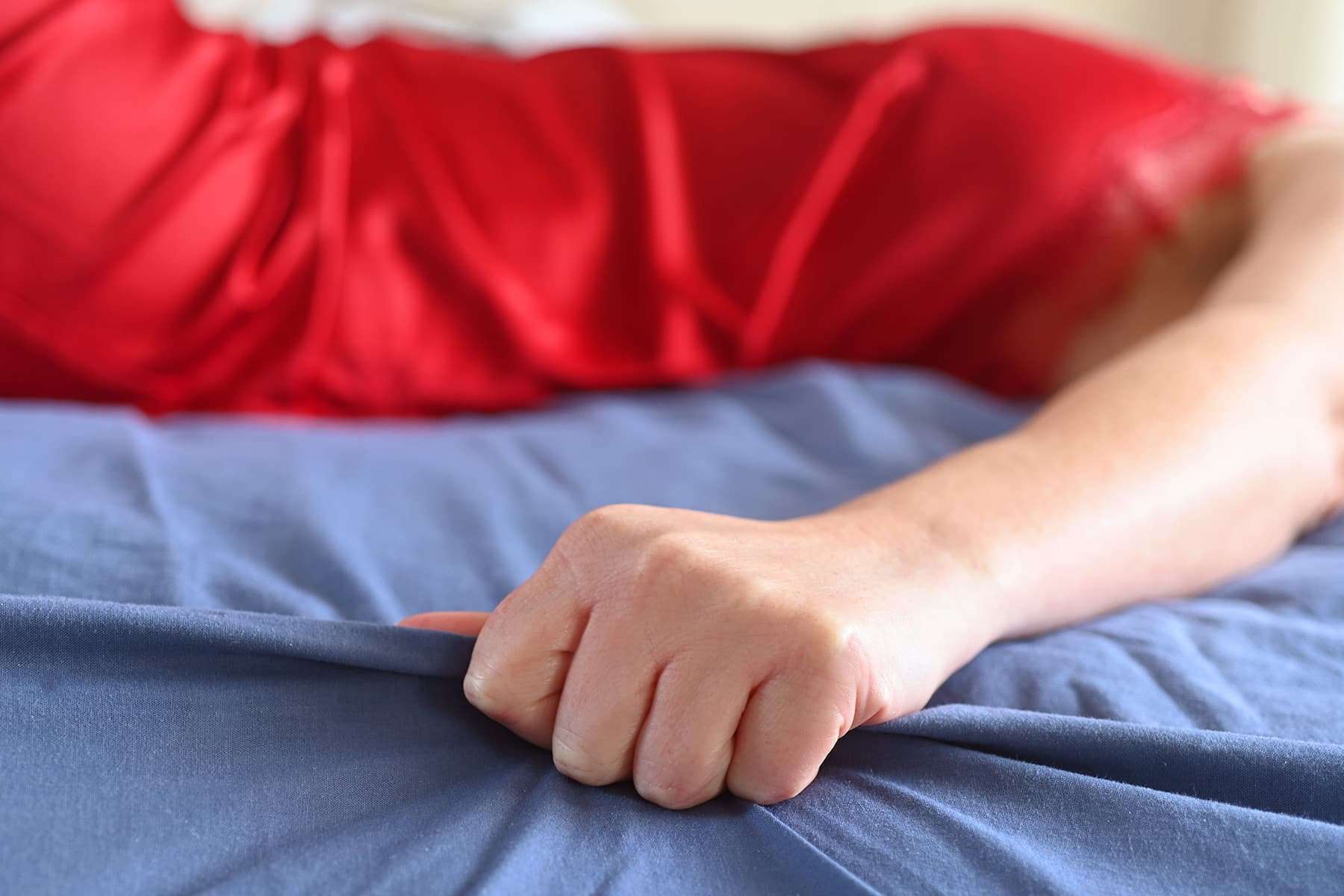 Instead of climaxing, Eva* used to cry.

From the first time she had intercourse, at 17, the buildup of emotion and sensation would often trigger a bout of tears. Other times, she felt as though orgasm was an almost-sneeze – “this very fast semi-climax, and then it was over. When I would hear about women who had multiple orgasms, amazing orgasms, I just couldn’t imagine.”

Eva, now 70 and retired from a long career in the film industry, kept her inability to reach orgasm a secret cloaked in shame: “Sometimes I’d almost whisper it at the end of a medical appointment.” For decades, she asked friends: “‘Who do you see? Who do you talk to?’ Nobody knew how to get answers or information.”

Eva may have been isolated, but she wasn’t alone. Studies estimate that 10%-15% of women have never had an orgasm, and nearly half report some degree of anorgasmia – absent, infrequent, unsatisfying, or painful orgasm.

Despite that prevalence, female sexual pleasure hasn’t earned nearly the same spotlight as male virility. Viagra commercials punctuate prime-time TV, but female orgasm remains a taboo topic, not only at the dinner table but even in clinical circles.

Lisa Valle, DO, is an obstetrician/gynecologist in Santa Monica, CA, who graduated from medical school in 2001. Her professors taught cursory lessons on sexually transmitted infections, but “the orgasm issues are typically a missed thing.”

In 2016, Valle opened a practice dedicated solely to women’s sexual health; her clients range from teen girls who can’t insert a tampon without pain to women in their 90s who want more sexual pleasure.

“[In a movie scene], he kissed her neck and all of a sudden she’s having an orgasm. It’s just not realistic,” she says.

In truth, women need arousal, which takes time, in order to reach the balance of excitement and relaxation required for orgasm. That involves hormones, lubrication, blood flow, pelvic floor muscles – they can’t be too tight or too loose – a clitoral hood that easily retracts, and a behind-the-scenes network of vestibular bulbs and perineal sponge.

It’s a common myth that orgasm “is all about the clitoris,” says Ellen Heed, PhD, a somatic psychologist with a specialty in sexological bodywork and a practice based in Ashland, OR. Actually, it’s a “reproductive-system response” in which a woman’s erectile tissue becomes engorged, round ligaments lift the cervix, and neurons in the brain fire in response to arousal.

“Women think orgasm is supposed to be spontaneous,” Heed says. “It can be. But we have to learn about it.”

Eva tried. She used vibrators and sex toys, including “some kind of a stick with a feathery thing on it to tickle your G-spot.” She attended weekend workshops on tantric sex and massaged estrogen cream on her clitoris each morning. “None of this was turning into an orgasm,” she said.

She also began reflecting on a sexual, medical, and social history that included a traumatic incident at age 8 – a male relative masturbated in front of her – along with three abdominal surgeries, a series of yeast and fungal infections, and a C-section when she was 35.

All of those can affect a woman’s ability to orgasm, according to experts. That’s why Erica Marchand, PhD, a Los Angeles psychologist with a focus on sexuality and relationships, always refers clients with anorgasmia for a full physical evaluation.

Scar tissue from prior surgeries, C-sections, or episiotomies may impede orgasm. So can the hormones in birth control pills and the ingredients in some psychiatric medications. Endometriosis, urinary tract infections, and yeast infections can affect pelvic floor muscles.

Physical therapist Stephanie Prendergast co-founded the Pelvic Health and Rehabilitation Center, with locations in northern and Southern California and New England; her focus is on pelvic pain and sexual dysfunction.

“An orgasm is a rapid muscle contraction, a combination of voluntary and autonomic,” she explains. “In a normal, functioning pelvic floor, we should be able to control the muscles. In pelvic floor dysfunction, we can’t. People don’t realize that’s why they may have orgasm challenges.”

From Manual Therapy to Emotional Work

After doing a thorough history and a physical evaluation – “we’ll examine everything from the ribs down,” she says – Prendergast does manual therapy, including trans-vaginal work, to restore movement and reduce pain in muscles, tissues, and nerves. Women may need core exercises to restore weakness in the pelvic floor or gentle stretching to relax those muscles.

“Once we see that their physiologic function is there, we need to help them become orgasmic again,” Prendergast says.

That often involves emotional work as well. Childhood learning and beliefs about sexuality – as well as unwanted sexual experiences, sexual violence, or trauma – play a huge role in women’s ability to reach orgasm, says Marchand. “I talk to people about their mindset about sex and pleasure: What did they learn when they were younger about sex? How do they feel about themselves and their bodies? Is pleasure something that feels OK?”

Valle, as part of her initial assessment, asks clients about anxiety and depression, medication and surgeries, stress, and sleep patterns. She uses the “Q-tip test” to check for sensitivity and pain in the vulva, vagina, and clitoris. She might refer women to an endocrinologist, a pelvic floor physical therapist, or a sex therapist who specializes in trauma.

And she works to counter the cavalier advice traditionally dispensed by doctors who fail to understand the complexity of female orgasm. Valle keeps a running list of the unhelpful suggestions her patients have received: Drink some wine. Try lidocaine. Go on vacation. Just relax.

Some Feel Shut Out of ‘the Orgasm Club’

Shame and secrecy compound difficulties with orgasm. “If someone was shamed or told their whole body was wrong, or that any kind of desire was ungodly or indulgent … then finding permission to be embodied at all is something we have to come to before even talking about orgasm,” says Heed.

And when a woman can’t achieve orgasm, she may isolate herself further by not discussing it, even with friends. “Women feel like they don’t belong to the orgasm club, and that feels sad, intimidating, helpless, hopeless. Like they’re missing out on something,” Heed says.

For years, that was the case for Jennifer Anderson, a 36-year-old technology trainer. From the time she became sexually active at age 17, her focus was always on pleasuring her male partner.

“If he was satisfied sexually, then I’d done my job. When we were having sex, my mind would race about things that were not sex-related. I had a mental block about being aroused. I struggled with partner orgasms for as long as I can remember.”

“With a female partner, things were way different,” she says. “I feel more self-satisfied, knowing about this whole new world of sexuality and sexual pleasure.”

A Crash Course in ‘the Big O’

Health practitioners say there are strategies that work to help women with anorgasmia. Heed, the somatic psychologist, might recommend “orgasmic meditation,” in which a woman uses lube and strokes her clitoris as a mindfulness practice, learning about and experiencing the sensations.

Attention to female orgasm is not just a matter of individual pleasure, Marchand says. Orgasm “is a matter of equity and equality. It feels like a social justice issue to me.” The good news, she says, is that “most of the time, orgasm is a learnable skill.”

That’s true for Eva, who struggled with orgasm for nearly all her adult life. Her current partner, a man she began dating 2 years ago, is patient and open to trying new strategies to help both of them find pleasure in sex.

“It’s the best relationship, the most connected and sweet, that I’ve ever had,” she says. And while she still faces obstacles to sexual ease – arthritis, a knee replacement, the hormonal changes that come with aging – Eva also notes a renewed sense of motivation.

“We haven’t had a lot of intercourse, but I feel like there’s progress. I’m hopeful. I’m in the middle of it. I feel like I’m on a journey that might get me there.”

*Some names have been changed to ensure anonymity.