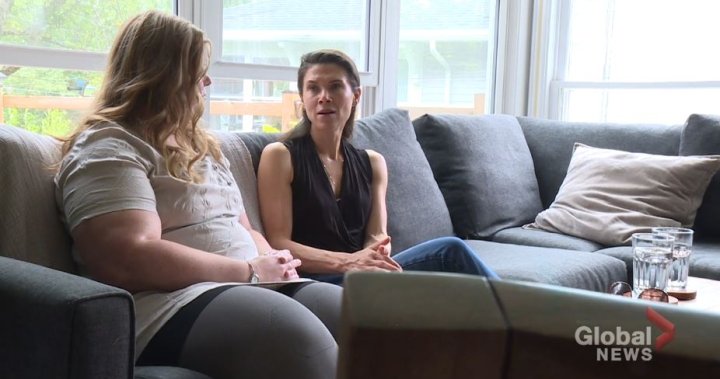 Two Nova Scotia women are seeking a judicial review of decisions made by the health department to refuse out-of-country coverage for their surgeries.

Jennifer Brady is a single mother living with lymphedema, a progressive disease that causes lymphatic fluid to build up, leading to painful swelling. She acquired the condition three years ago after cervical cancer surgery to remove her lymph nodes.

To help ease the pain, Brady said she pays out of pocket to wear costly compression stockings day and night and sees a massage therapist for manual lymphatic drainage.

“I’ve been doing everything I can to manage the symptoms, so that’s referred to as conservative therapy,” she told Global News. “All of those things I was doing and none of them were actually working to stop or slow the progression of my disease, so it was continuing to get worse.”

In November, she got a blood infection — a common complication from lymphedema — which landed her in the emergency department for five days.

Surrey hospital to perform first surgery of its kind in B.C. to help prevent lymphedema

“Within hours I had a really high fever, my left leg in particular was super swollen, very painful, red hot, and just red looking at it, and that put me in the ER with IV antibiotics,” she said.

“That brought me to surgery, needing surgery as something that was actually going to address the underlying disease and not just manage the symptoms.”

The problem is surgery for lymphedema is not offered in Nova Scotia, and in order to get funding for out-of-country health care, a referral by a Nova Scotia specialist is required, according to the province.

But Brady said there is no such specialist in the province.

“The province had asked me to get a specialist referral from one doctor in Halifax, who has a four-year long waiting list,” she said, adding she had already provided a referral from her genderal practitioner and her gynecological surgeon, which MSI said wasn’t sufficient.

“As a single parent facing recurring blood infections … I couldn’t wait for four years. I literally went to bed every single night thinking I was going to wake up like I did in November with a life-threatening blood infection,” she said.

And so Brady pursued surgery herself. She borrowed $80,000 to fund the procedure in Japan.

“I was able to borrow against the equity of my house, which, as a single parent…it’s going to be a struggle for me to be able to afford that,” said Brady.

Not the only one

Crystal Ellingsen, 43, is in the same situation.

She lives with lipedema, a condition that causes excess fat to accumulate in the lower half of the body.

“It’s misery,” said Ellingsen, adding it’s also exacerbated her arthritis, and now she’s unable to do a lot of what she once enjoyed, such as playing with her five children.

“It’s stealing from my quality of life.”

She too has been managing her symptoms with compression stockings and massage therapy.

“It doesn’t manage my lipedema at all, it manages my swelling,” she said.

“I’m trying to keep my tissues in good condition for when it comes time to surgery.”

Surgery is the only real way to limit or stop the progressive disease, she said.

But like Brady, she said she has been met with roadblock after roadblock to accessing surgery, as she said the procedure is not offered in Nova Scotia.

She also has been unable to find a local lipedema specialist to provide a referral for out-of-country care, or a MSI-approved specialist without a multi-year waitlist, despite providing a referral from her family doctor.

Because lipedema only gets worse over time, she is now contemplating a massive loan to fund the surgery herself.

“That’s my children’s future, not even mine. Like, the equity in our home? That’s my only option?” said Ellingsen.

Both women are now seeking judicial reviews of their out-of-country coverage refusal.

“The policy is preventing us from getting the care that we need, and when we’ve brought that to the province’s attention, they’ve done nothing to help us,” said Brady.

In an email, Khalehla Perrault, a spokesperson for the department of health, said the typical referral process would begin with a referral from the resident’s primary health care provider to a Nova Scotia specialist for a consult.

“If the Nova Scotia specialist determines that treatment options outside of the province or country are appropriate they would initiate a request to the MSI Medical Consultant seeking approval,” said Perrault.

“There are specialists in NS who provide care for both lipedema and lymphedema patients.”

The judicial review request was filed in the Supreme Court of Nova Scotia on July 22. It states that while this is the policy, in both cases, they were unable to meet requirements because “no such specialist exists.”

“What we need is care, and the province is preventing us from getting that care,” said Brady.

“I understand that the policy is that we need to have a referral from a Nova Scotia specialist, but I think it needs to be a timely process. And as the referral process is written now, it doesn’t provide us with timely access to care, especially because we have progressive conditions.”

While the pair is hoping to get support in the short term, they say they also want to see the policy changed, as it’s not serving all Nova Scotians.

“In the longer term, Nova Scotia needs to catch up with where lymphedema and lipedema care is in the rest of the world,” said Brady.

“Would I have much rather had surgery in Nova Scotia? One hundred per cent, of course I would, but that just simply isn’t an option.”

Ellingsen said she would like to see the policy adapted so that a referral from a GP will be sufficient.

“I want the province to see there’s a huge gap,” said Ellingsen. She said statistically speaking, there are probably 40,000 people in the province living with lipedema.

“Not everybody needs surgery, but the earlier you catch it the better the results. It means less money down the road, it means less strain,” Ellingsen said.