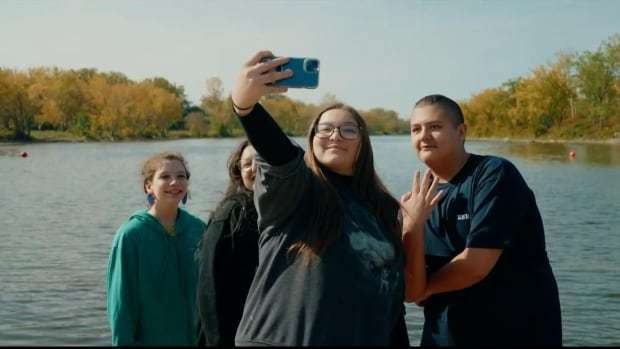 One at a time, the Kanien’kehá:ka students took the stage in the auditorium of Howard S. Billings High School in Châteauguay, Que., and bowed to the applause of their classmates as the big screen filled with the opening shot of their music video They Fly.

As the music started and on screen the quartet of Grade 7 and 11 singers gathered around the purple and white of the Haudenosaunee flag.

Under the guidance of Cree rapper and music producer, Cayden Carfrae, the students wrote and produced the song as part of inPath’s N’we Jinan program to amplify the voices of Indigenous youth and provide opportunity for creative self-expression.

As the youngest of the quartet, Grade 7 student Lola Rosa Onekwentaraonerate McQuaid felt nervous at the start. But her anxiety did not last long. Despite her age difference with the others, the group clicked.

McQuaid was excited for an opportunity to try something new and speak her mind. Each student brought different ideas and themes to the song-writing process, but the unifying message is finding freedom in new opportunities, she explained.

“I really wanted to participate in this because you don’t usually see mixed natives or Natives with blue eyes and super pale skin represented on TV or just anywhere,” she said.

“No matter how you look you can still be Native.”

McQuaid had not really considered pursuing music but said she now dreams of becoming a singer.

The experience also gave her the chance to forge connections with fellow Kanien’kehá:ka (Mohawk) members of her community and learn about her Indigenous culture. “It helped a lot because I don’t really have many Native friends.”

Grade 11 student Wahientha Katelyne Cross aspires to the Broadway stage after graduation. “I want to become a singer when I am older, so I found this was a good way to exercise my voice while also exercising my beliefs,” she said.

“I think that Native representation on screen is very important for young Indigenous children, to see that they can really become something.”

Cross said she would definitely do it all again if she could. “I found that I’m more confident now,” she said. “It’s a program that pushes you out of your boundaries [and] to try new things.”

Carfrae said the students quickly came together and grew as Indigenous creators in the process, incorporating Kanien’kéha (Mohawk) words into the lyrics and choosing locations to film in Kahnawake on Montreal’s South Shore for the music video that were meaningful to them.

“We’re really just trying to foster a sense of community in a sense of identity within the youth that we work with,” Carfrae said.

“As an Indigenous person, seeing kids so prideful, so hopeful about their future inside of their culture, it gives me a lot of hope for our future generations knowing that some of our past generations had some of these things taken away.”