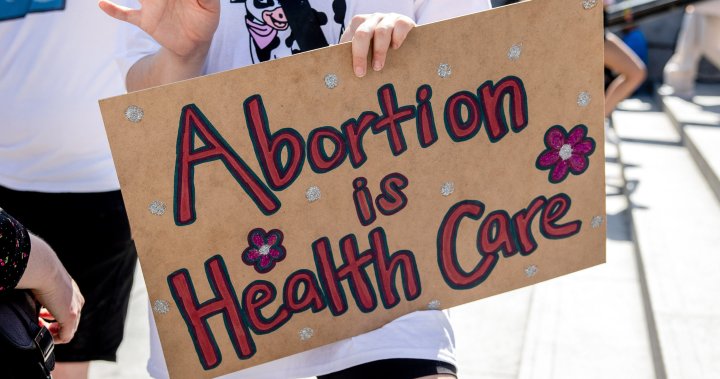 Although support for abortion access has increased over the last decade in Canada, it wavers for younger age groups, a new poll suggests.

The Ipsos poll, conducted exclusively for Global News and released Friday, found that a majority of Canadians support access to abortion whenever it’s wanted.

Risk of losing abortion access can be stressful, experts say. Here’s how to cope

This 56 per cent majority is up 13 points from previous Ipsos polling conducted in 2010 – the first time polling on the topic was conducted by the company.

“We were really curious to know where Canadians stand on the issue,” Sanyam Sethi, vice-president of public affairs at Ipsos Canada, told Global News.

“If I compare the results from 2010 to the results of today, we see that Canadians have become far more pro-choice in their beliefs.”

However, those between the ages of 18 to 34 showed the least support in comparison with older generations, results show.

“This is a very rare issue,” said Sethi.

0:50
University of Michigan medical students walk out on keynote speaker with anti-abortion views

Compared with the 63 per cent of Canadians 55 and over who believe people should be permitted to have an abortion whenever wanted, only 50 per cent of those 18 to 34 believe the same.

A total of 15 per cent of respondents 18 to 34 also believe abortion shouldn’t be permitted unless the mother’s life is in danger.

These findings aren’t only limited to Canada either, according to Sethi, who noted the trend is also upheld globally.

Down 10 points from previous polling, 11 per cent of respondents believe abortion shouldn’t be permitted under any circumstances, regardless of the age group, except when a mother’s life is in danger.

Among men, 14 per cent also said abortion shouldn’t be permitted unless the mother’s life is in danger. This number is five points higher than women.

“It’s pretty consistent,” said Sethi. “There are several issues where we have divisions on gender lines but this is not one of them.”

One in four (25 per cent), want the issue reopened for debate in Canada. In 2010, amid speculation that this might actually happen under the then-Conservative government, this number sat nine points higher.

Despite access to abortion remaining challenging in parts of Canada, 61 per cent of Canadians say things should be left the way they are, while 14 per cent say they don’t care one way or the other.

In Atlantic Canada, only 42 per cent said abortion should be permitted whenever wanted, compared with 63 per cent in Alberta, 61 per cent in British Columbia and 54 per cent in Ontario.

Canadians becoming firmer in their stance over the right to choose comes in the wake of the U.S. Supreme Court’s step to overturn the landmark Roe v. Wade decision that has for decades affirmed the right to abortion in the country.

“The issue of abortion has been front and centre in America. The world is watching and so are Canadians,” Sethi said, noting the number of political leaders in Canada who have spoken out since the law was overturned.

After the decision, Prime Minister Justin Trudeau said his government will continue to protect safe and legal abortion access in Canada.

“I agree, there’s much more work to do to expand access to reproductive health services so they’re available to all Canadian women,” Trudeau said on Twitter on July 6. “We will keep doing that work.”

These are some of the findings of an Ipsos poll conducted between July 12-13, 2022, on behalf of Global News. For this survey, a sample of 1,001 Canadians aged 18+ was interviewed. Quotas and weighting were employed to ensure that the sample’s composition reflects that of the Canadian population according to census parameters. The precision of Ipsos online polls is measured using a credibility interval. In this case, the poll is accurate to within ± 3.5 percentage points, 19 times out of 20, had all Canadians aged 18+ been polled. The credibility interval will be wider among subsets of the population. All sample surveys and polls may be subject to other sources of error, including, but not limited to coverage error, and measurement error.