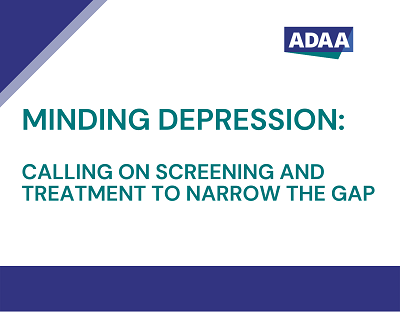 A newly published study on depression in the American Journal for Preventive Medicine reports that from 2015 to 2020 the prevalence of depression in the United States, particularly among adolescents and young adults in the nation, increased and that the pandemic contributed to a worsening mental health crisis. While distressing, it is not surprising that the most common mental health disorder, and the strongest risk factor for suicide in the US, is on the rise. What is unacceptable, if not a surprise, is that the study tells us that the widespread increase in depression is not commensurate to increases in treatment. There is a widening gap in treatment, putting more people at risk of potentially desperate or dangerous situations.

The study, led by researchers at Columbia University and City University of New York who used data from the National Survey on Drug Use and Health from 2015 to 2019, highlights that most individuals with depression remain untreated or undertreated. Even with, as the study points out, “substantial progress in evidence-supported pharmacologic and psychotherapeutic treatments” being made over the past few decades, adequate and inclusive practice and access to affordable high-quality care remain unattainable for many with mental health disorders.

In 2020, the study notes, nearly 1 in 10 Americans and almost 1 in 5 adolescents and young adults experienced a major depressive episode. To put this in perspective, imagine you were in a large elevator two years ago, and granted we were still social distancing then but let’s say you were in an elevator in 2020, with nine other people; one of those people had a major depressive disorder. It could have been you. It could have been me. What would you want to say to that person?

I would say to everyone on that elevator and anyone I come across to be screened and receive treatment if needed. In a group of five teenagers, I would want to tell them all to be screened, or to ask their parents or caregivers to have them screened, because according to this study, one of them has, had, or will have depression. ADAA member Dr. Richa Bhatia, years before this study, wrote in an ADAA blog that rates of childhood depression were mounting, but that information and awareness lagged.

As National Depression Screening Day approaches on October 7 this year (2022), we at ADAA encourage you to ask your medical providers, not just on that day but any day of the year you need it, to be screened for depression, or to have your child or adolescent screened. Ask for the results, discuss them with your provider and insist that you receive appropriate and affordable treatment. Hold your provider accountable to screen, to explain, and to work with you on finding the help you or your child needs.

Interim Chair of Psychiatry at Columbia University and incoming ADAA Board President Helen Blair Simpson, MD, PhD says the study is important as a US national database showing the increase in depression, and particularly untreated depression, and that something has to be done.

“I agree with the authors that these patterns demand immediate action,” Dr. Simpson told ADAA, “especially for adolescents and young adults at both the clinical and public health levels.”

Even before the pandemic, the study notes, rates of depression were climbing, reflecting an escalating public health crisis which is becoming more and more critical. If we are to have any hope of sealing that mental health crisis dam over the next five years, we must act now.

ADDA’s Chief Medical Officer, Dr. Sanjay Mathew, called the results of the study “sobering,” confirming that the researchers and authors of the study capture the crux of the issue.

“Depression, particularly in adolescents and young adults,” he told ADAA, “remains a common condition that is inadequately treated.”

The study concludes that multi-pronged public health evidence-based campaigns that promote early intervention, prevention, and education about depression are needed immediately. I agree. But we can also all do something every day to help: talk about it, get screened, and demand treatment.