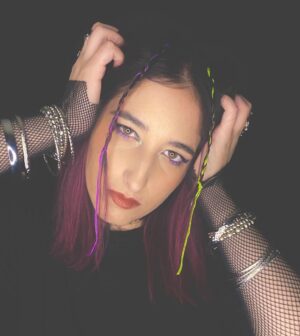 It’s the first taste of Lindsey’s ‘Out Of The Ashes’ project, a series of five multifaceted singles that will be released in the coming months

Nashville, TN – One fateful night, alternative rock singer-songwriter Lindsey was sitting in her bed in the pitch black when she finally asked for help with her all-consuming depression. She had had enough. A divine message came in a jolt of inspiration for a song, and, when she finished jotting it down, something profound in her life had shifted. Titled “Save Me,” Lindsey has just released a stirring music video for the song, which Wonderland Magazine called “a valiant attempt at facing one’s own demons in order to move forward.” Watch HERE.

“I grew up battling depression, and I felt I had to hide and mask what I was going through. I would be super up in public, and down in private,” the Nashville-based artist shares. “I knew I couldn’t overcome these demons by myself, but it took a lot for me to ask for help. Writing that song that day was the turning point when I walked into the light.”

Lindsey is a faith-based artist with a universally resonant artistic gift and ability to bring unity and hope to the world. “My music is me, and I am a believer—I’m not afraid to share my faith—but my message is for everyone. I don’t want people to feel judged or like these songs aren’t written for them.  Hope and redemption are for everyone,” Lindsey says.

“Save Me” is the song that changed everything, and it’s a divine charge of sleekly-emotive modern rock. The song features chunky hard-rock guitars, haunting gothic ambience, and viscerally vulnerable vocals—the sound of a tortured soul pleading with heavens. Here, she sings: I’m burning, ripping, tearing it down/Out of the ashes, I’m no longer bound/Fighting the darkness that tries to invade/I’m lighting a match, now let’s see it fade. This song was written from frontlines of spiritual warfare over Lindsey’s depression, and its powerful video shows her in a house haunted by demons setting fire to rooms that teem with toxic symbolism of inner struggles such as addiction, depression, and abuse. In the end, Lindsey walks out and the house burns down behind her. “That dramatic finale symbolizes leaving your past behind, and no longer will those unhealthy urges and feelings have a hold on you,” she says.

Her debut—a 5-song series of singles collectively titled, Out of the Ashes (Rohr Records)—is a cinematic and darkly cathartic cycle of songs written from the trenches of depression, in a time of Lindsey’s life where the darkness felt all consuming. Through symbolic and metaphoric songwriting, the singles document the story of a woman raised Christian who had her faith tested, but ended up reclaiming her connection with God. Out of the Ashes blurs together genres such as modern rock, pop, electro-pop, indie, alternative, punk, and emo with its sweeping strings, hard rock candy riffage, and moody textural passages. Lindsey has been favorably compared to Evanescence, Imagine Dragons, and Paramore.

Lindsey grew up in a Christian household dutifully attending church and living by the Word. In college, a cloak of depression descended on her, and she experienced being at odds with her spiritual connection. “I was going down a dark road,” she admits. “I had all kinds of questions—I didn’t know what I believed anymore—and I came home and my big sister helped me through it, and that’s when I wrote, ‘Save Me.’  It felt like I found God for the first time, like my faith felt like a choice, and I recommitted,” Lindsey shares.

Lindsey had written poetry since she was a little kid, but the outpouring of lyrics surrounding the “Save Me” epiphany felt different, and more purposeful than her creative writing did in the past. Her words flowed naturally, and Lindsey didn’t belabor how the songs would sound. In a natural creative flow, her songs just came alive in the studio as they were intended.

Look for Lindsey touring and performing around Music City and beyond, sharing her songs of hope and healing. “I want people to know they don’t have to be stuck in their current situation,” she says. “I write about dark things, but I always show people the light on the other side. Ultimately, I want to give people hope that they can overcome something they didn’t think they could.”