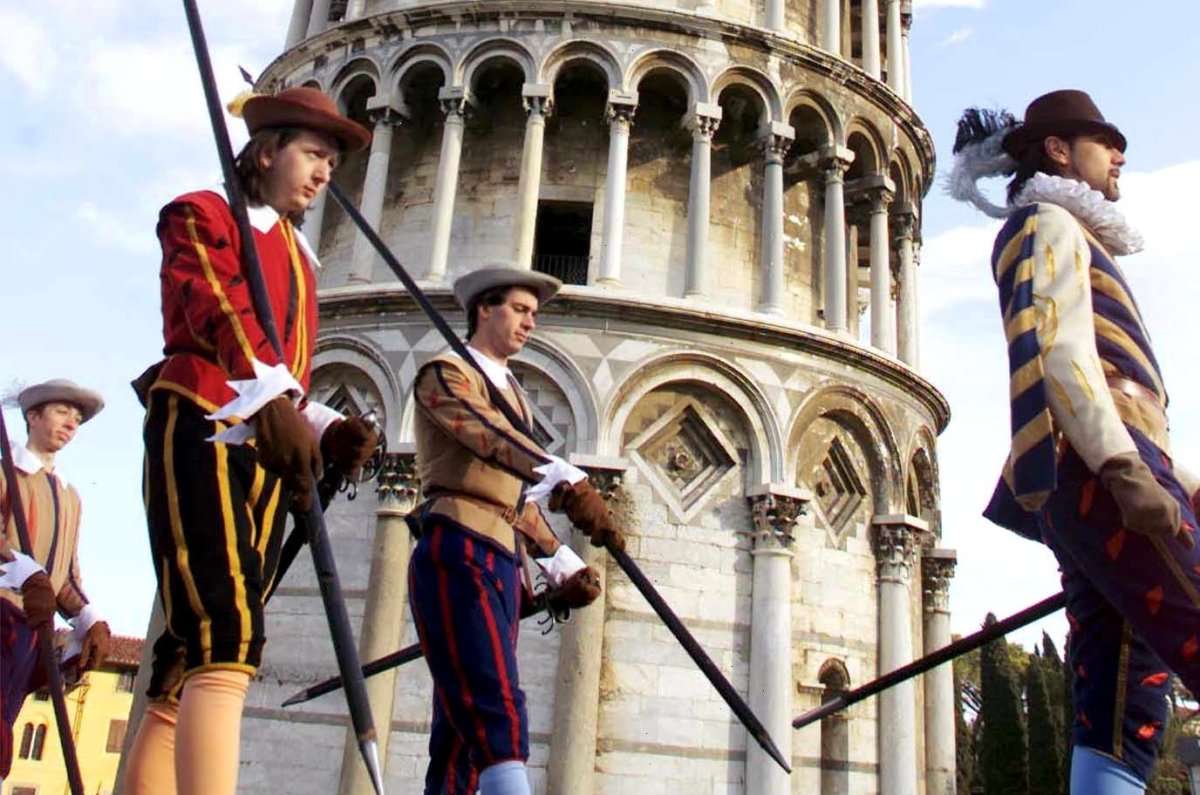 Honor guards in historical costumes pass by the Leaning Tower of Pisa on December 15, 2001, after the tower’s re-opening to the public. File Photo by Franco Silvi/EPA/ANSA

In 1791, the Bill of Rights, comprising the first 10 amendments to the U.S. Constitution, took effect.

In 1890, Sioux Indian leader Sitting Bull was killed in a skirmish with U.S. soldiers along the Grand River in South Dakota.

In 1939, the film version of Gone with the Wind premiered in Atlanta.

In 1945, U.S. Gen. Douglas MacArthur ordered an end to state Shintoism in Japan, a key belief of which was that the emperor was a divine being. Because the U.S. government supported freedom of religion, though, it did not place an outright ban on the religion.

In 1961, Adolf Eichmann, the Nazi SS officer regarded as the architect of the World War II Holocaust, was condemned to death by an Israeli war crimes tribunal.

File Photo courtesy of the National Photo Collection of Israel

In 1973, John Paul Getty III is found alive at a gas station outside of Naples, Italy, more than four months after he was kidnapped.

In 1973, the American Psychiatric Association reversed its longstanding position and declared that being gay isn’t a mental illness.

In 1990, in a landmark right-to-die case, a Missouri judge cleared the way for the parents of Nancy Cruzan to remove their daughter from life-support systems.

In 1992, Salvadorans celebrated the formal end to their country’s 12-year civil war.

In 1997, 85 people were killed in the crash of a Tajik Airlines charter jetliner in the United Arab Emirates.

In 2001, the leaning Tower of Pisa reopened after a decadelong restoration effort.

In 2011, the United States formally ended its long military mission in Iraq in a solemn ceremony at Baghdad’s international airport. Defense Secretary Leon Panetta declared the war was over. It had begun in 2003.

In 2014, Man Haron Monis took 18 people hostage inside a Lindt Cafe in Sydney, Australia. The standoff, which lasted 16 hours, finally ended when police raided the cafe the next morning. Monis and two hostages died in the ordeal.

In 2017, 16-year-old Palestinian activist Ahed Tamimi was recorded slapping and kicking an Israeli soldier in the West Bank after forces shot her younger cousin the head for throwing rocks. She was arrested days later and sentenced to eight months in prison.