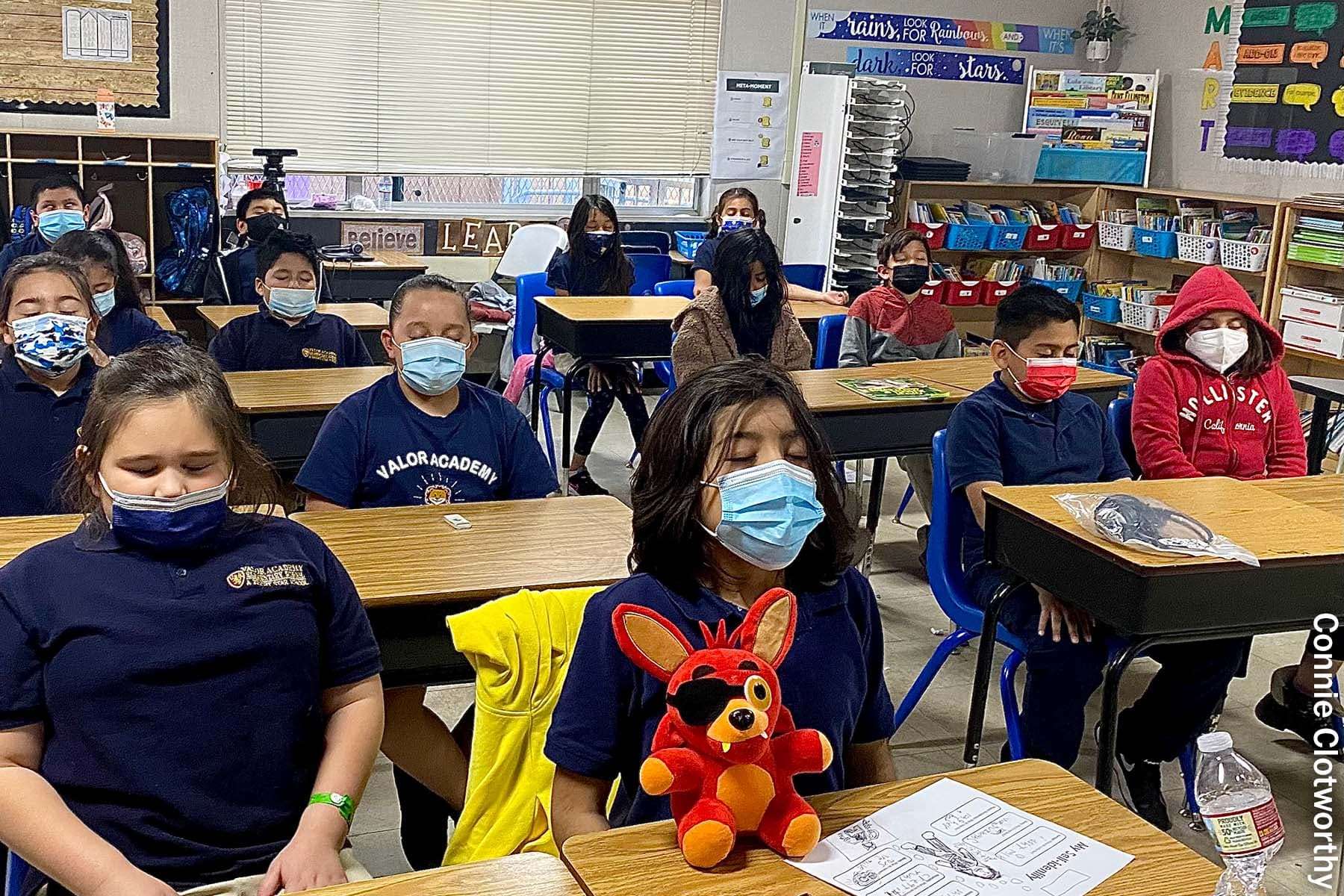 She starts by leading them in a mindfulness exercise, reminding the 19 students they have to give their brain a break “on purpose.” In a calm voice, she says, “for 30 seconds we are going to close our eyes.” She tells them to just breathe in, breathe out. Nothing else. They all do that.

Then, Clotworthy brings out her teaching assistants: A stuffed bulldog named Billy and a stuffed owl named Hoots.

She talks about “big emotions.” Holding up Billy, she says: “When you get angry, you’ve let our dog start barking and biting,” waving the stuffed dog around. “And how do we calm down our dog? Breathe. Who helps? Hoots.”

But Hoots can only help after Billy calms down, she reminds them. “Do you think Hoots will come out if Billy is barking and screaming?” The kids know the answer to that, shaking their heads “No” in unison.

The session ends with a 5-minute meditation and “body scan,” a guided exercise of noticing body sensations without judgment, done with eyes closed.

Clotworthy is executive director and founder of Worthy Beyond Purpose, a Los Angeles nonprofit launched in 2018. She leads the once-a-week, 30-minute mindfulness and meditation program at Valor Academy Elementary and at five other area schools.

After the session, she says proudly, the kids know that Billy represents the amygdala, the brain region associated with emotional processing, and Hoots is the prefrontal cortex, the brain’s control center involved in emotion regulation.

Clotworthy and other practitioners like her are increasingly taking to classrooms to use mindfulness and meditation to try to help ease pervasive mental health issues from pandemic trauma, isolation, school closures, school shootings, and other issues constantly plaguing students of all ages. Study after study has found many negative mental health effects of COVID-19 safety measures on children and adolescents.

While the terms mindfulness and meditation are often interchanged, experts say that mindfulness is the quality of “being in the present moment, without judgment,” while meditation describes a more formal practice of quieting the body and mind.

Mindfulness is not religious, Clotworthy says, but a way to “stay in the present.” The word, put most simply, “just means paying attention. We teach kids to be in the present.”

Besides helping students deal with stressors, it can be good for society, as the Dalai Lama promised in his famous quote: “If every 8-year-old in the world is taught meditation, we will eliminate violence from the world within one generation.”

Rosamaria Segura is director of Insight LA’s Insight in Action program, which provides mindfulness and meditation practices to areas that would otherwise be unable to afford them. The program is offered to students at three schools and to teachers and parents at six others.

“We offer it at no cost,” she says. Sometimes it is a 6-week program, other times a year. Community members fund it with donations.

Students served are “recent arrivals, Spanish-speaking,” Segura says, and “there is a lot of anxiety and trauma, from their journey. We train students to stay in the present,” with the mindfulness exercises.

“Last year, we had a mindfulness garden, outdoors, with elementary students,” she says. The students would enter the garden and choose a sticker to match their mood. At the beginning, most chose stickers reflecting worry or anxiety. “At the end of the session, the stickers would move up to the joyful, relaxed state. It was incredibly dramatic to see.”

What the Research Suggests

Mediation and mindfulness for adults have long had a list of known benefits, such as stress reduction and mood improvement. Recently, a well-publicized study found a program called mindfulness-based stress reduction rivals a prescription medication in how well it treats anxiety disorders.

Recent research also has found benefits for children and teens, although some experts argue that enthusiasm is outpacing the evidence and that the studies need to be more scientific.

Among the recent studies:

Does It Work at School?

Some results from the school programs are anecdotal, some survey-based.

At Valor Academy Elementary, a public charter school in the LA Unified School District, the differences in behavior are noticeable, says Talar Samuelian, assistant principal of culture. She launched the program there in late 2021 with her third and fourth graders, concerned about their behavior after the pandemic brought remote learning.

“We had a lot of students with behavioral challenges and self-regulation issues,” she says. “The third graders had missed out on all of [in-person] first and second grade. There was catty behavior among the girls, and the boys were very handsy out in the yards. They had missed out on [developing] a lot of play skills.”

This year, the students are much calmer, she says. Among the benefits, she believes, are that “it helps with increasing the sense of belonging.”

One thing surprised Samuelian. She had assumed some of the third and fourth graders would be “too cool” to take part and push back. “Not one did,” she says. “They were all transfixed; they are all into it.”

At the end of the 2021-2022 school year, Clotworthy surveyed 400 students who had taken part in her program at four schools. Her findings: “91% of the students can correctly identify and describe the functions of the amygdala and the prefrontal cortex,” up from 10% before the sessions began.

“We begin with these teachings so kids will know where their emotions live, how to identify them, and how to stay ahead of the outbursts,” she says.

A vast majority of the kids – 88% – say they have new ways to handle these big emotions, such as breathing techniques. And 85% say they know to listen to the body and feel the emotion coming before it erupts. Nearly 60% told Clotworthy they get in trouble less since starting her classes. Teachers told her that kids have a longer attention span in classes and more emotional maturity.

Headspace’s own research found that 30 days of Headspace led to a 32% decrease in stress, while 8 weeks of use led to a 19% decrease in anxiety symptoms and improved focus by 14%.

Indira Esparza Galeana teaches at the Preuss School on the campus of the University of California, San Diego. The charter middle and high school is for low-income students who strive to become first in their families to graduate from college. The daughter of immigrants, she graduated from the school, returned to teach there, and now works as a member of the Vivi Educator Council, an unpaid position, to roll out the VIvi partnership.

Galeana’s testing the Vivi-Headspace program in one of her Advanced Placement 12th grade government classes and one ninth grade ethnic studies class. Feedback has been positive, she says. Students are receptive to learning to meditate; one says it was relaxing and another says it made him think a lot. “I think that’s just showing they have a lot on their minds right now.”

“Mindfulness is a normal human state,” says Patricia (Tish) Jennings, PhD, a professor of education at the University of Virginia. “Young children tend to be very mindful,” naturally capable of focusing on the present moment.

Jennings is internationally recognized as a leader in mindfulness in education and has taught mindful awareness practices to children and adults for more than 40 years.

“I started doing this with kids in my Montessori class in 1981,” she says. At the time, “I didn’t call it mindfulness or meditation. I would say, ‘We are learning to calm down, to focus our attention.’”

Basically, Jennings says, what’s known is the practice really helps kids to self-regulate. “It does help them pay attention, and it does help them calm down. Self-awareness and self-management are really important.”

She led a team that developed a mindfulness-based professional development program for improving teacher well-being and student engagement and has written or edited books on mindfulness in schools.

Kylie Garcia, a 9-year-old with dark brown eyes and hair, who had listened intently during the session and took part fully, says: “I like meditation because my body felt calm when meditating.” She compares it to a recess break.

Jaden Martinez, also 9, says he views mindfulness somewhat like subtraction. When you just breathe during mindfulness, he says, it can help you get rid of all those random thoughts – subtract them, basically – and just be in the moment.

Clotworthy says some students say they have taught the techniques to their parents.

At Valor Elementary, mindfulness class is on Thursdays; one girl offered: “I wake up and realize it is mindfulness day and I’m excited to come to school.”