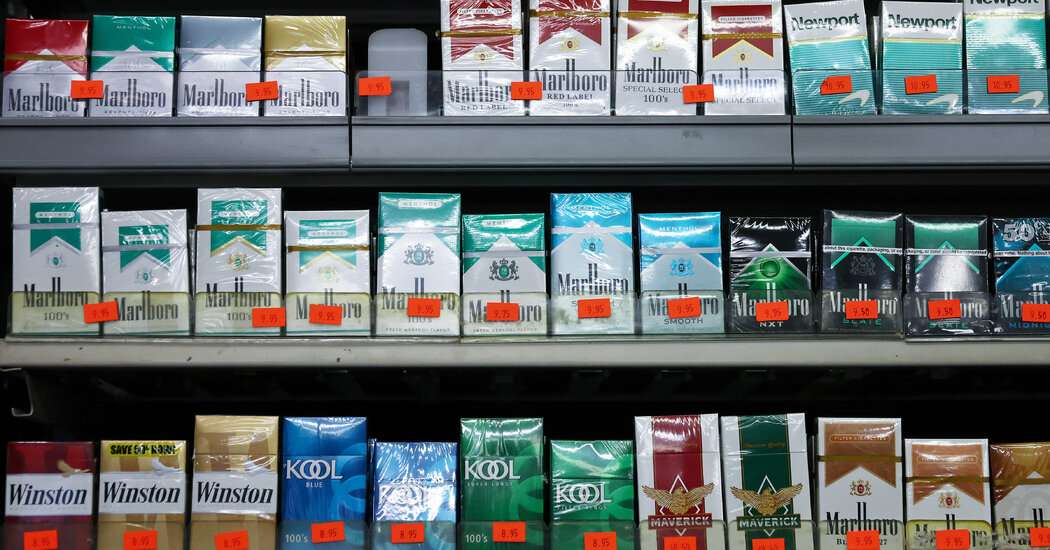 WASHINGTON — The Supreme Court on Monday refused to block a California law banning flavored tobacco, clearing the way for the state’s ban to take effect next week.

As is the court’s practice when it rules on emergency applications, its brief order gave no reasons. There were no noted dissents.

R.J. Reynolds, the maker of Newport menthol cigarettes, had asked the justices to intervene before Dec. 21, when the law is set to go into effect. The company, joined by several smaller ones, argued that a federal law, the Tobacco Control Act of 2009, allows states to regulate tobacco products but prohibits banning them.

“They can raise the minimum purchase age, restrict sales to particular times and locations, and enforce licensing regimes,” lawyers for Reynolds and several smaller companies wrote in an emergency application. “But one thing they cannot do is completely prohibit the sale of those products for failing to meet the state’s or locality’s preferred tobacco product standards.”

Affirmative action. The marquee cases of the new term are challenges to the race-conscious admissions programs at Harvard and the University of North Carolina. While the court has repeatedly upheld affirmative-action programs, a six-justice conservative supermajority may put more than 40 years of precedents at risk.

Discrimination against gay couples. The justices heard an appeal from a web designer who objects to providing services for same-sex marriages in a case that pits claims of religious freedom against laws banning discrimination based on sexual orientation. The court last considered the issue in 2018 in a similar dispute, but failed to yield a definitive ruling.

Whether the federal law displaces the state law turns on the interpretation of interlocking and overlapping statutory language in the federal law. The state officials told the justices that “courts have universally rejected the tobacco industry’s arguments that state and local laws restricting or prohibiting the sale of flavored tobacco products are expressly pre-empted by that act.”

They added: “Indeed, in the 13 years since Congress enacted” the 2009 law, “no court has agreed with the tobacco industry position that the act pre-empts restrictions and prohibitions on the sale of flavored tobacco products.”

Reynolds also lost on that issue in March in a case concerning a Los Angeles County ordinance similar to the state law. A divided three-judge panel of the U.S. Court of Appeals for the Ninth Circuit, in San Francisco, ruled that the 2009 law did not displace the ordinance. Reynolds has asked the Supreme Court to hear that case.

A federal judge considering the company’s separate challenge to the state law ruled in November that she was bound by that precedent and refused to block the law.

The law had been set to go into effect early last year, but it was suspended while voters considered a referendum challenging it. The tobacco industry spent tens of millions of dollars in support of the measure, but 63 percent of the state’s voters approved the law in November.

In their Supreme Court brief, state officials urged the justices not to delay the law any longer. “The unsuccessful referendum campaign has already delayed the implementation” of the law for nearly two years, they wrote, “allowing children and teenagers across the state to be initiated into the deadly habit of tobacco use via flavored tobacco products throughout that period.”

The plaintiffs told the justices that they face “substantial financial losses” from the law, noting that menthol cigarettes make up about a third of the cigarette market.

Allowing a ban on menthol cigarettes, lawyers for the plaintiffs wrote, “could also cause significant negative consequences for communities of color, including African Americans. Because African American smokers in particular disproportionately prefer menthol cigarettes, California’s ban would disproportionately harm them, including by exposing them to negative encounters with law enforcement.”

More on the U.S. Supreme Court

“When we look at the need to protect African Americans from the predatory exploitation of the tobacco industry, we need to look at the fact that a menthol ban will protect them,” Ms. Yerger said. “It will not only add years to people’s lives, but it will increase the quality of their life.”

State officials pointed the justices to a letter in April from the N.A.A.C.P. to the Food and Drug Administration lamenting what the group called the “egregious marketing practices of the tobacco industry” and the fact that “African Americans suffer disproportionately from being addicted to cigarettes and the effects of long-term tobacco use.”

Last week, the Justice Department announced an agreement for 200,000 retailers to display eye-catching signs in their stores about the dangers of cigarette smoking. The order goes into effect in July and gives retailers three months to post the signs. The agreement settles the terms of a 1999 racketeering lawsuit filed by the U.S. government against tobacco companies, including Reynolds.

Also last week, a federal court judge in Texas sided with tobacco companies, blocking an F.D.A. order to place large graphic warnings about the harms of cigarettes on individual packages.