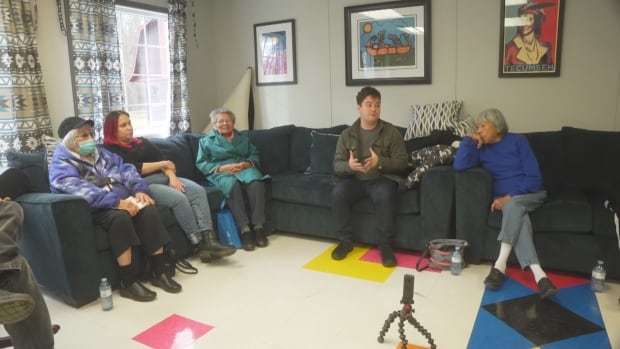 To help keep the language alive, the First Nation has connected with a U.S. YouTube creator who brought it to the masses.

The language is thousands of years old.

“You have a whole element that is missing if you don’t have the language because it’s contained within it, so our ancestors for generations have utilized and understood the language as it relates to creation and our purpose here, our intent,” said Giizhgad, the immersion co-ordinator for the local school and president of the non-profit language learning facility Nwewnan Sasaang.

He said that critical piece has become a challenge, but one he and others are working to restore. The decline of the use of the dialect stems from the impact of Canada’s former residential school system, Giizhgad said.

A short lesson in Ojibway

Mino Giizhgad, the immersion co-ordinator for the local school on Walpole Island and the president of the not-for-profit language learning facility Nwewnan Sasaang, shared a greeting and a thank you in Ojibway.

Giizhgad works on the immersion program, which since 2015 has involved children as young as those in junior kindergarten learning Ojibway. The work to revitalize the language also saw a member of Walpole Island reach out to Arieh Smith, who creates content for YouTube under the handle Xiaomanyc.

Smith, who lives in New York City, was in his late teens when he became interested in learning a modern language. He took free Chinese classes, eventually living in China for a year, and continued to learn the language.

“When I got back to the [United States], I started to make videos about learning languages and stuff like that. But it was a few years before I realized that people were interested in watching me,” he said.

Smith, who has learned many languages, said he has always been interested in Indigenous languages.

“Growing up in New York, I didn’t really know anybody [Indigenous] and it just seemed to me something so very mysterious, but like something that I should know more about … because clearly people were not speaking English in this country 500 years ago.”

After living with a Navajo family, learning the language in the Navajo Nation, he posted a video about his experience that got the attention of Walpole Island.

“I’m not only making entertaining videos on the internet — not just indulging my passion for language learning as a linguist — but it’s also a chance in some small way, I think, to create awareness,” Smith said.

It’s something that’s been envisioned for some time now, but we’re getting to a point now where we really have to have this type of facility to do what we can to essentially save our language from extinction.– Mino Giizhgad, president of Nwewnan Sasaang

The video of Smith at Walpole Island, speaking in Ojibway and taking part in the cultural practices, has been online for three weeks and has already garnered one million views.

Smith connected online with an elder for about a month off and on, and spoke with other community members involved with the school, which is at the centre of language revitalization on Walpole Island.

“It definitely felt very special to be able to learn a language from somebody who has this kind of uninterrupted connection with the past and such ancient language, and I saw that there was difficulty because … how do you conjugate a word depends on different factors,” Smith said.

Smith said the experience was amazing and wonderful.

“It was so cool to go there and and do this because again, coming where I come from, it’s not something that I encounter on a day-to-day basis or ever,” he said.

Before going to Walpole Island, Smith thought having only a few elders who speak the language was a sad situation, but he’s found since going there that the children were picking up the dialect.

“It was very hopeful seeing kids, like very young kids, being educated in the language and with local ceremonies,” he said. “For me, it’s just interesting as an observer of human cultures. But you know, I’m sure for them, they have a much greater interest in seeing their own language and culture preserved, and so it was really exciting and really interesting.”

On the video’s page on YouTube, Smith said there’s a fundraiser to support Indigenous communities in North America, with about $7,400 raised by Friday afternoon.

There’s also a link to a fundraiser aiming for $100,000 to help pay off the mortgage for the non-profit Nwewnan Sasaang —meaning sounds from the nest — which will teach the language to children as young as two years old.

“It’s something that’s been envisioned for some time now, but we’re getting to a point now where we really have to have this type of facility to do what we can to essentially save our language from extinction,” said Giizhgad.