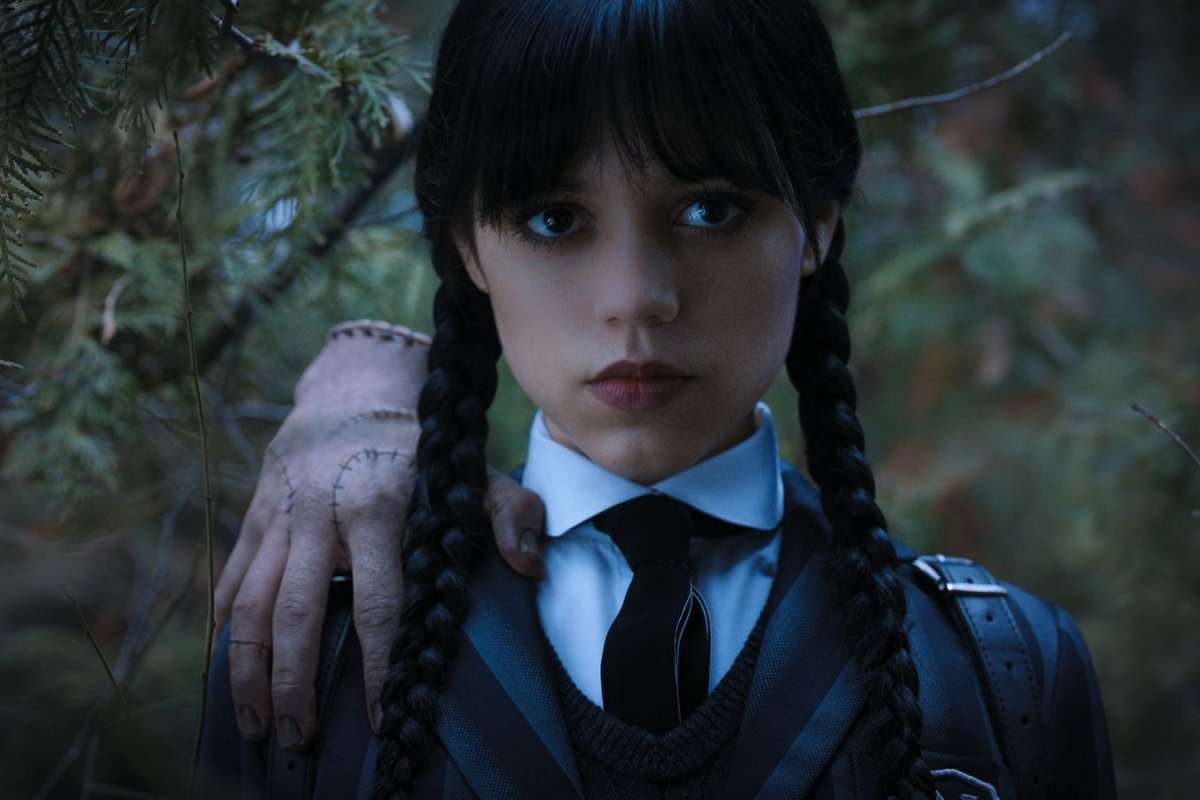 Jenna Ortega, seen here with Thing on her shoulder, stars as Wednesday Addams in “Wednesday.” Photo courtesy of Netflix

Dec. 28 (UPI) — Netflix’s series Wednesday broke records by becoming the most streamed English-language program in a single week in the history of the streaming service.

In the few short weeks since the show premiered in November, it has already become the second-most viewed English-language program on Netflix, reaching nearly 174 million households with 1.19 billion hours viewed. The series was nominated for Best Television Series, Musical or Comedy for the 2023 Golden Globe Awards.

The show has also proved to be a breakout role for Jenna Ortega, who plays the titular character Wednesday Addams. The actress was nominated for a Golden Globe for Best Performance by an Actress in a Television Series.

While 2022 has been a career milestone for Ortega, the 20-year-old actress has been acting since she was eight. Here are five other Jenna Ortega performances to check out.

CBS’ remake of the Venezuelan telenovela Juana la Virgen tells the story of Jane, a 23-year-old religious Venezuelan-American, who promises her grandmother she will save her virginity until marriage. Jane’s world gets turned upside down when she is accidentally artificially inseminated during a doctors visit. While Jane is portrayed as an adult by Gina Rodriguez, Ortega portrays young Jane in childhood flashbacks interspersed throughout the series, which ran from 2014 to 2019.

‘Stuck in the Middle’ — Disney+

On this Disney Channel series, which ran from 2016 to 2018, Ortega portrays Harley Diaz, the middle child in a family with seven children. Harley is an engineering prodigy who uses her inventions to navigate the chaos of living with her large family. The character serves as both star and narrator of the show, frequently breaking the fourth wall to tell the audience about the situations her family finds themselves in. In a clip that has been rediscovered by fans, Ortega prophetically compares herself to a particular day of the week: “This is what happens when there are seven kids, and you’re stuck in the middle. If my family was a week, I’d be Wednesday,” her character says.

Netflix’s psychological thriller follows serial killer Joe Goldberg as he kills victims, develops obsessions, falls in love, and eventually has a child. In Season 2, Ortega portrays Ellie Alvez, a 15-year-old aspiring filmmaker who lives in Joe’s apartment building and interns for a troubled comedian. Her character doesn’t appear in Season 3, but is mentioned. Season 4 of the series will be split into two parts, with Part 1 to premiere Feb. 9, and Part 2 to follow March 9.

Netflix’s family comedy stars Jennifer Garner as Allison Torres, a mother who decides to give her children a “Yes Day” — where she cannot refuse anything they ask for if they complete their chores and behave. Ortega portrays Katie Torres in the 2021 film, who asks her mother to bring her to a music festival for her “Yes Day.” Ortega was nominated for a Imagen Award for Best Actress in a Feature Film for her role.

The 2022 followup of the 1996 horror classic shows a new Ghostface murder young people linked to the killers from the original film. Ortega portrays Tara Carpenter, who leads the new cast of teens being hunted down. She will appear in the sequel, Scream VI, which will open in theaters March 10, 2023.